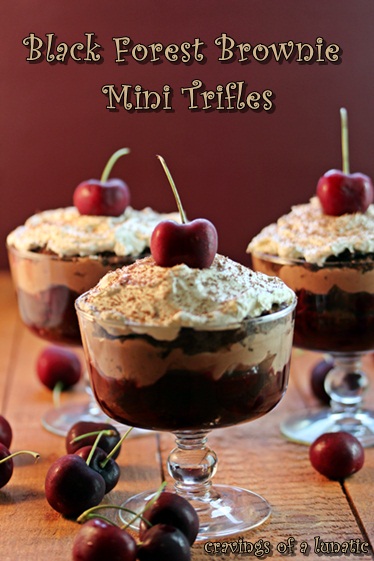 I made these tasty trifles last week. They are so amazing I can barely contain my excitement in describing them. But first let me tell you about one of the ingredients in this dish. It’s a brownie a friend named Skye pointed out to me about a year ago. I was sceptical about them and basically tried them to prove her wrong. That’s a huge claim to name them the way the author did. Then I tried them and it all made perfect sense. So for this trifle recipe you get the pleasure of using the recipe for the brownies if you like. I jumped at the chance to make some. In fact, I made a couple of batches of The Best Brownies In The World. One to use for this, and not going to lie, one to just munch on for no good reason. If you have not tried the recipe for The Best Brownies In The World you need to try them stat! Kid you not folks, they really are the only brownies I ever want to make since finding the recipe.

So for this scrumptious Black Forest Brownie Mini Trifles recipe you need to layer your yummy ingredients. The brownie layer goes in first. Then I whipped up an incredibly delish cherry concoction to pour over top of the brownies. It’s a simple recipe and takes just a few minutes to make but you would think it took all day. It tastes that yummy! Then I whipped up some chocolate mousse using chocolate milk instead of regular milk. I find doing things like that, just a small thing, makes a huge difference. It becomes Super Chocolate Mousse instead of plain old chocolate mousse. I added some more brownies on top of that. Then I topped it with whipped cream. And last I added a fresh cherry from the market right on top. It’s dishes like this that make my job a joy every day. I get to make delicious food and sample it while photographing it. I tell you taking those shots where the food is half eaten is a perk of the job folks. 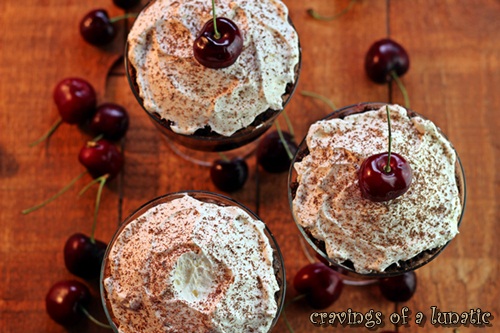 I have a tendency to get carried away with these types of photos. I could wax on about how it’s for artistic reasons, it gives the best shot and all that jazz but let’s just be honest here, it is just too hard to resist plucking off that first cherry while it’s still cold and biting into it. It’s like a taste explosion every time. The first cherry is always the best one. To me there is no fruit that compares to them. They are my all time fave which is why you see them fairly often on the blog. When they are in season I just cannot get enough of them. I eat them to the point of tummy aches. But how can your resist. It’s like trying to resist digging your spoon through layers of whipped cream and chocolate mousse. 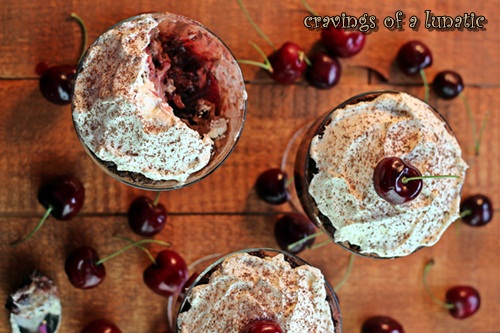 Each time the family walks by I pretend to be working hard.  You’ll hear me carry on with things like “oh hubs, this job is so difficult. I’m struggling to get the best angle and make sure you can see all the way to the bottom of the bowl. It’s such a huge sacrifice to have to eat it all. But I will suffer for my art.” I stare at him waiting for him to console me about how hard my job is while he stares back at me blankly and points to the side of my face. What’s a little whipped cream all over your face when you’re amongst family right. Geez, seriously hubs, have some compassion. 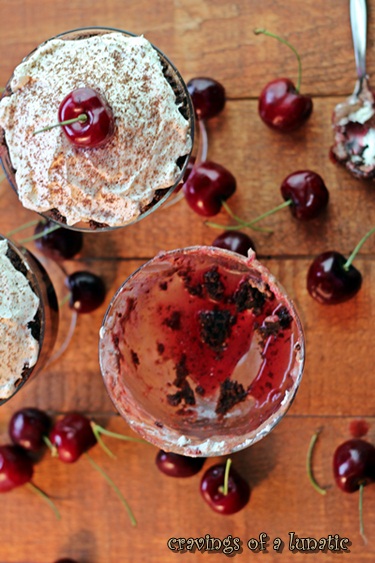 I tell you I really suffer for my job. Look at that empty bowl. I mean I even had to go put on my stretchy pants for this one. Now that’s sacrifice people. That’s going all the way for your art!

This was originally made for a pal of mine named Sofie who blogged at The German Foodie. She has since stopped blogging so I’m not updating this post with the recipe. It took me some time to track down the file, but alas I stumbled on it amongst some old documents. Days like today you just have to love technology. 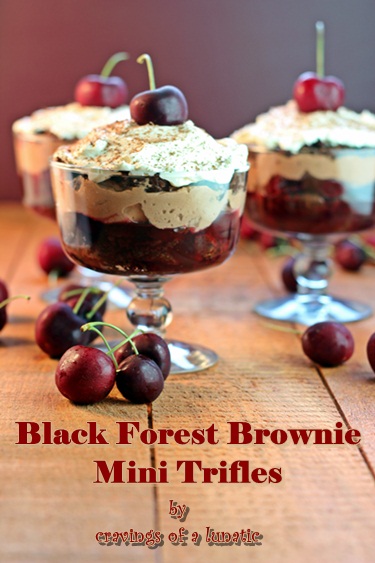 This was originally made for a pal of mine named Sofie who blogged at The German Foodie. She has since stopped blogging so I’m updating this post with the recipe. It took me some time to track down the file, but alas I stumbled on it amongst some old documents. Days like today you just have to love technology. 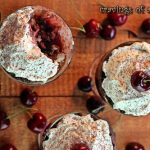 I've included making the brownies in the cook time. If you use pre-packaged brownies it will lower your time a bit. 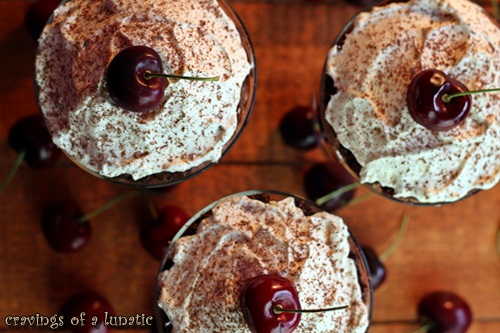 We made it back late last night from our one day trip to Techmunch Toronto. I took B-Dude on this trip so he could go visit some friends before he moves off to Calgary next month.  It was nice to take a road trip, just the two of us. He’s a horrible navigator though. He likes you to think he knows where he’s going by constantly saying “I think it’s just right up there” when in fact he has no idea where where “it” is. Yet he kept us on course and fairly on time. He also kept me from losing my mind in some really bad weather and driving conditions on the way home. So bad navigator but good mom calmer-downer person. We had an absolute blast yesterday. I shall fill you in more on that trip and confernce later this week. I did not take photos during the conference though. I tend to go into student mode at them and am more focused on taking notes than taking photos. So I will only have photos of the aftermath at Eaton’s and Whole Foods. What? Tell me you wouldn’t hit the mall and Whole Foods if you lived in boonieland and made a trip to the city. Pfft!

ps. I do have some photos of the concert we attended. You will love them. Cannot wait to share them with you!