A simple macaroni and cheese recipe made with Beemster Cheese, Chorizo and Sun Dried Tomatoes! You’re going to love this one! 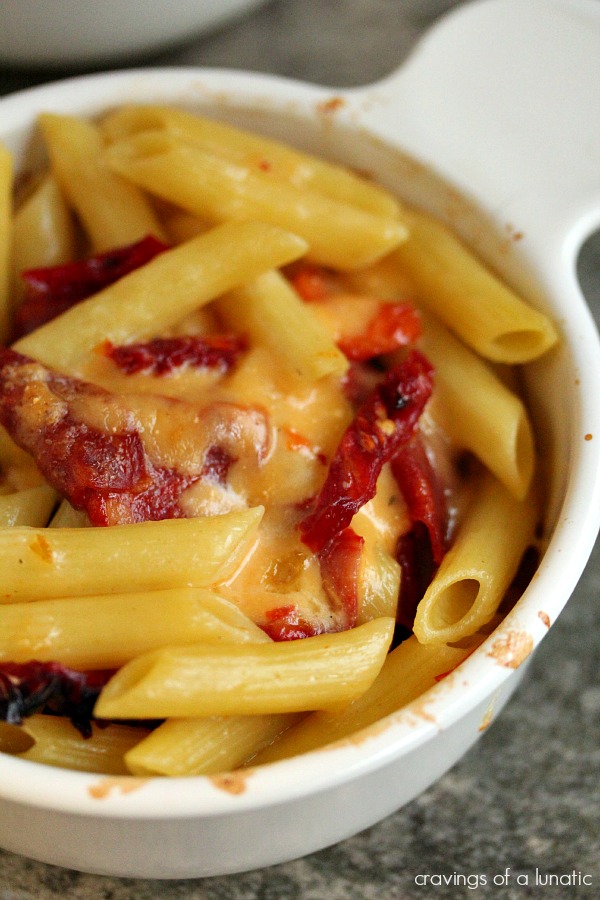 I’ve said it before and I’ll say it again. In fact I’ll scream it from the rooftops. One of the amazing perks of being a food blogger is becoming friends with other foodies. Those foodies become your inner circle, your peeps, your homies, if you will. The sense of community is amazing amongst food bloggers. So when one, or in this case two, of our own go on to do great things, like write an amazing cookbook about macaroni and cheese you want to rally around and help spread the word. Such is the case with Melt: The Art of Macaroni and Cheese written by Stephanie Stiavetti and Garrett McCord. This book changed my life. No lie. I’ll get to that but first a little back story.

Stephanie is one of my foodie peeps. I adore the woman. She’s hilariously funny, wickedly talented and just the most supportive, thoughtful person. She’s the kind of gal who even though she’s busy she will email you to offer you help when you want to beat the tar out of your email service provider. She emails to say hello and check in on you. She has your back when your nerves get frazzled in life, as nerves tend to do in life. I’ve been lucky to get to know her and count her among my foodie homies.

When Stephanie emailed me to see if I’d like to take a peek at her new cookbook she wrote with Garrett McCord I jumped at the opportunity. Stephanie is my homie and I adore her. And Garrett is like a food blogging superhero who I quietly stalk so I don’t reveal what a dorky fan I am. Oops, busted! *insert dorky grin here*

So here’s what Stephanie doesn’t know. I have never, and I mean never, in my entire life (and it’s been a pretty long one thus far) made mac n cheese from scratch. I’m totally not kidding. I’ve only experienced the blue box version so up to this point in my life I’ve always told people I hated mac n cheese. However my family loves it, but they also only know the blue box. So I politely agreed to review the book without filling her in how sceptical I was that I’d like it. Well, colour me surprised folks. There’s a whole new world out there waiting to be explored. And it’s paved with macaroni, cheese and the tears of all those missed years of enjoying home-made mac n cheese in all it’s glory. I had no idea. My world will never be the same. I have Stephanie and Garrett to thank for that. 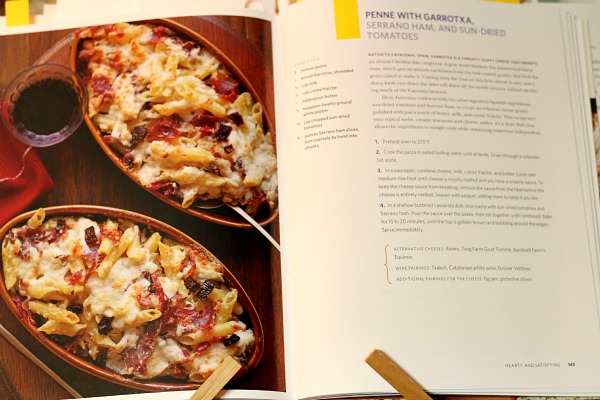 The cookbook is not only beautiful but it’s filled with loads of information so you learn your way around a good mac n cheese. They explain the importance of salt and cheese, how the salt added at different stages affects the taste. They tell us whether or not to remove the rind. They help us understand the differences between soft cheeses and hard cheeses, and everything in between. There are tips on shredding, storing, choosing, and experiencing cheese. They delve into different types of pasta. Tips on choosing alternate cheeses abound, as well as wine pairings, and food pairings. The book is a wealth of knowledge for mac n cheese newbies like myself, and I’m quite certain even the most discerning macaroni and cheese lovers as well.

I have to admit I’m stumped how their photos are sheer perfection in the book. Cheese is not easy to photograph. The timing has to be perfect, the cheese has to be melted perfectly, and you need to make sure it didn’t break in the cooking process. It’s a fine art and these two executed the shots beautifully every single time.

For my post I chose to make their Penne with Garrotxa, Serrano Ham and Sun Dried Tomatoes. The problem is I live in boonie-land. I swear it’s the culinary black hole. Finding ingredients for dishes like this can be difficult. After much searching I realized I would have to substitute some ingredients. I never panic. That’s life in a small town. You deal, you move on. I found some aged beemster, a friend thought it might make a good substitute. She’s a fellow Canuck and knows our brands are a bit different on this side of the border. I could not find serrano ham, so I picked up Prosciutto and also some Chorizo as a back up plan. I could not find creme fraiche so I made my own. It’s what us small town folks do. If you can’t find it, improvise. So I did. And the results were fabulous. 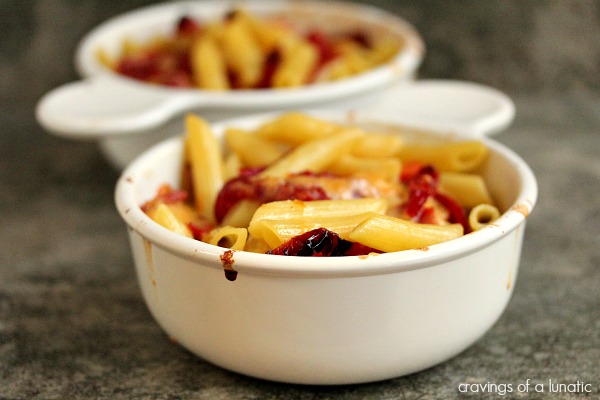 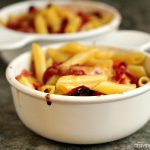 A simple macaroni and cheese recipe made with Beemster Cheese, Chorizo and Sun Dried Tomatoes! You're going to love this one!

What's really cool about mac n cheese is the unlimited possibilities. It's amazingly diverse. It also reheats beautifully if you pop it back in the oven. We made extra, then the next day we topped them with extra cheeses we had in the house and had them for lunch. Divine! Full Credit for the recipe goes to Stephanie Stiavetti and Garrett McCord 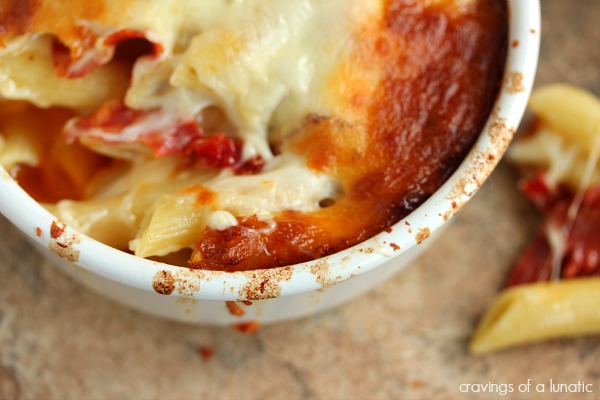 We went a little cheese happy when we had leftover mac n cheese the next day. Seriously, if this is wrong I don’t wanna be right!

I have to tell you I just loved that these two people opened up my eyes to really good, homemade macaroni and cheese. I had no idea what I was missing. So huge props to Stephanie Stiavetti of The Culinary Life and Garrett McCord of Vanilla Garlic. This cookbook is going to be flying off the shelves. It’s a must have. You need to order a copy of Melt: The Art of Macaroni and Cheese today!

So the Melt team is holding a very cool, and unique giveaway. I’m going to point you over to Stephanie’s site, The Culinary Life to check it out. Head over there for all the details on how to win an amazing prize of a $500 set of Le Creuset cookware and a $100 gift certificate for Murray’s Cheese.

Congratulations to Stephanie and Garrett. I am thrilled to have a copy of this amazing book, and to be a small part of your journey. I just know this book is going to be a huge success. I have complete faith in both of you. The book is stunning so I know it’s going to be a treasured cookbook in many households, including this one.

For my readers who would like to purchase the book you can purchase it through Amazon by using my affiliate link. I get a small percentage of any sales. Which I’m going to be honest, I’ll be using those pennies to save up for more amazing cheeses to fuel my new mac n cheese habit.

If you love leftovers make sure you pile on more cheese and pop these bad boys back in the oven the next day. So good. We had such a blast playing around with different options. 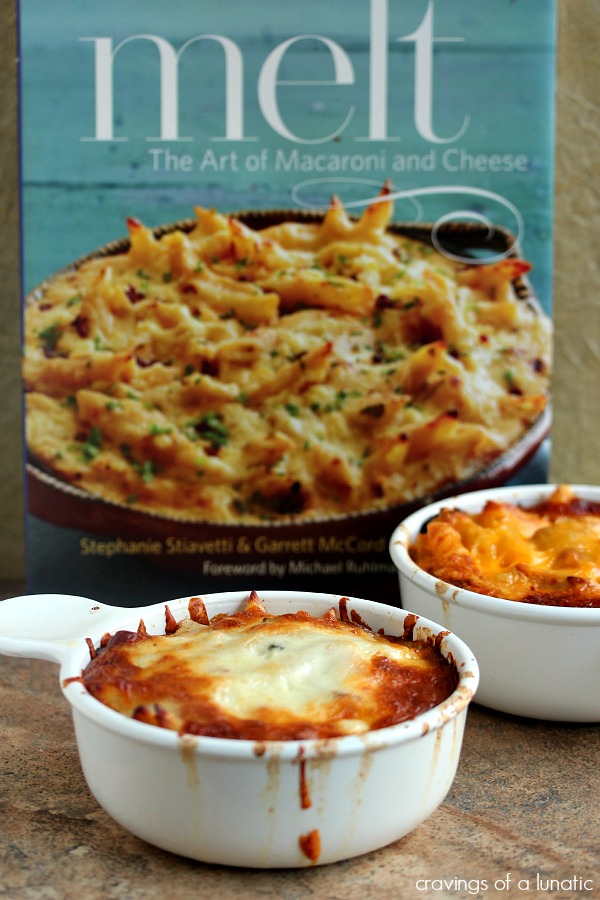 Disclaimer: I was sent a copy of Melt to review. The book was provided to me for free. I was not paid for this review. All thoughts and opinions are my own. Seriously people, by now you should know me well enough to know you’re getting the truth with any review. Who else calls her friends “foodie homies”. There’s no edit button here. You get the truth 100% of the time. And usually a nice doze of silliness with it. You’re welcome.