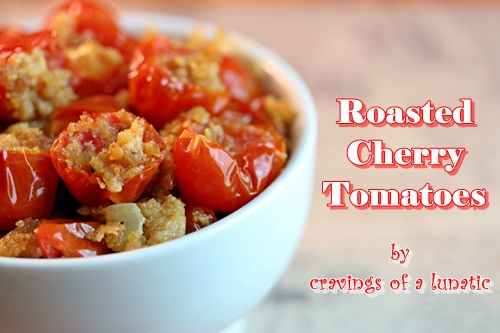 Today I am posting something more serious than the usual fare I serve up. I heard about The Giving Table from Cassie of Bake Your Day. She had given me the honour of interviewing her for Burning Down The Kitchen. I always ask the folks I interview if there is anything they are working on they would like me to share. Cassie blew my mind with her small request. It was to mention her work with this organization in raising awareness about the conditions workers face in the tomato fields. Her request was so selfless that I knew I would make an effort to promote the cause in the interview. I decided to go a step further after receiving an email from Cassie's friend Nicole. I made the decision to stand alongside fellow bloggers like Cassie, and everyone involved in Food Bloggers for Slave Free Tomatoes to  help make people aware of what is going on in the world around them. So not only will you be getting a recipe today but I am going to ask you all to go read over the information on The Giving Table. Also please read the information on the Recipe for Change page. It will change your outlook on where you buy your tomatoes and how the workers are treated.

Here is the information in their words as I feel it's the best way to get the point across. I do not want to lose anything in translation, so to speak. Please read it over and decide if you would like to get involved.

The Problem
Slavery is not just happening overseas. Chief Assistant U.S. Attorney Douglas Molloy once
called Florida’s tomato fields “ground zero” for modern-day slavery in the United States. In the
past 15 years, over 1,000 people have been freed from slavery in U.S. tomato fields.

The Solution
Recipe for Change–a campaign led by International Justice Mission in partnership with the
Fair Food Standards Council and the Coalition of Immokalee Workers–is targeting three
major supermarket chains this summer (Ahold, Publix and Kroger’s), and asking its CEOs
to support the Fair Food Program. Corporations that join agree to pay a small price increase
for fairly harvested tomatoes (1.5 cents more per pound), and promise to shift purchases to
the Florida tomato growers who abide by these higher standards–and away from those who
won’t.

Major fast food companies, like McDonalds and Subway, have already endorsed the Fair Food
Program, but the largest U.S. supermarket chains have yet to support this collaborative effort
to eradicate modern-day slavery.

Call to Action
Supermarkets can help eliminate slavery and other serious abuses from the tomato supply chain
when they join the Fair Food Program. But in order to change its policies, CEOs need pressure
from consumers.

Take 30 seconds, raise your voice, and sign your name to help ensure that supermarket tomatoes
are slave-free!

**Link to this page where you can send the letter: Send HERE! 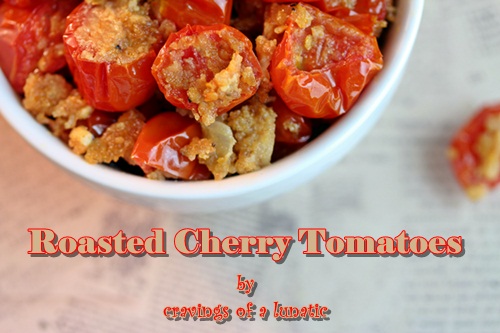 I hope you all take some time to read it over and decide for yourselves if you'd like to be involved. I don't normally stand on soap boxes but I felt like it was worth it in this case. The situation in Florida makes me wonder about our own local tomato workers. Everyone deserves to be treated fairly no mater where they come from or where they work. So think it over and follow your own heart.

While you are thinking over whether you want to get involved I'd like to share a tomato recipe with you all. I know this is an oddity for the Lunatic. Me and tomatoes and are not generally friends. I have some sort of weird allergy to raw tomatoes so I rarely use them in recipes. Hubby loves them but for me just cutting them causes a rash and itching beyond belief. I had B-Dude cut them up for me, then I carefully mixed it up with a spoon. I was so careful, seriously, I was. Until I took the photos. Then I touched one, and I am now itching the bejesus out of my neck and face. I didn't like the placement of one tiny little tomato and now I'm paying the price. Apparently I should have used tongs or tweezers to move the darn thing. Anyhow, I used a recipe from Canadian Living that looked promising. I do not have many tomato recipes in my arsenal due to my allergy so I needed some guidelines and inspiration. Hope you like this. I would say I sure did but the rash spreading its way across my neck and chest would beg to differ. I'll get hubs opinion tomorrow when he gets home. 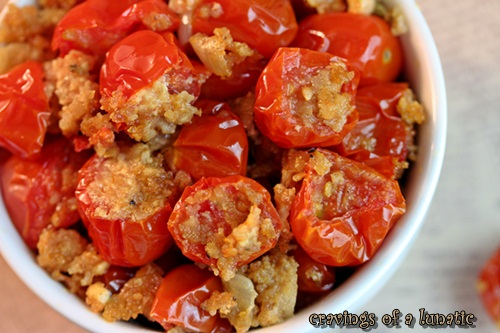 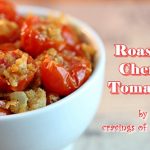 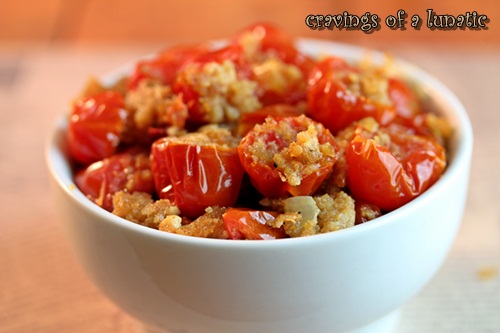 Looks good right. I just love staring at tomatoes. I love the colour and the way they pop any dish they are in. Unfortunately for me they also agitate my skin so I can only admire from afar. It's too bad though as they are so pretty. I can do tomatoes if they are cooked down like mad. They seem to cause less issues the more processed they are oddly enough. I do occasionally used canned ones for pizza sauce and pasta sauce. I just need to make sure it's cooked really well so it doesn't bother my skin. Odd I know.

Make sure you read about on this great cause and if so inclined sign the petition to make some changes. If nothing else be more careful where you buy your tomatoes from. We can all make the world a better place by taking small steps in the right direction. Thanks for stopping by.