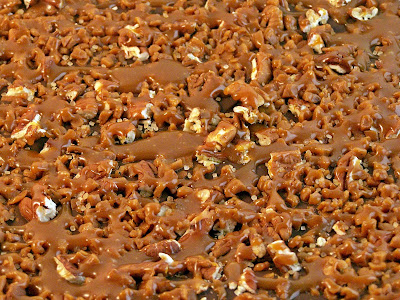 Hi folks. I am back with some bark for you guys. You know me and bark. If there's a way to play around with it I am all in. Love the stuff to bits. It's just so good. The variations are endless, the possibilities endless. You can get all kinds of creative with it. It also makes nice gifts for people. Which is why I made 4 different kinds the other day. No, I don't have any self control problems. Not at all. Not me. 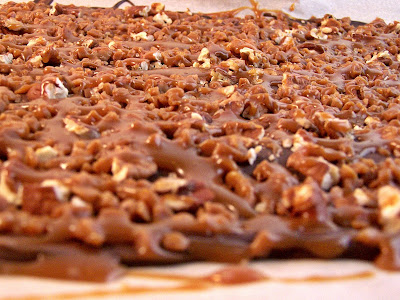 So I was thinking to myself "self, what kind of bark could we make that no one else has made?" And my mind immediately jumped to turtles candy. I had just picked some up at the store to give away as gifts eat it all myself, so it was on my mind. Then I thought I was a genius, I mean this was a million dollar idea. Look out world, here I come. Yah, not so much. Apparently a gazillion other people have already thought of it. I found a recipe on epicurious, Baker's Royale, Etsy, there's quite alot of turtle bark out there. So I did what I always do when I find out I did not discover something. I make it any way. I now had the craving and knew I was going to tackle it no matter what. The upside to doing a search was finding another cool bark recipe on Baker's Royale that I also made and will share another day. That girl can rock the bark. I love anyone who likes bark as much as I do.

I have to share a little story about Turtles with you before we get to the recipe. What? You did NOT just roll your eyes at me did you? I mean that's just rude. You should know by now all recipes come with stories. Unless your new. Okay if you're new here's some tips about your Lunatic:

1- I like lists, such as this one!
2- I make alot of goodies!
3- If you want those goodies you get some talkie talk talk with them!
4- If you don't want the talkie talk talk, well, scroll or hit up "givemetherecipenowwithoutthelip.com"!
5- I like to make up words. And fake websites and emails!
6- I could go on like this all day!
7- It doesn't even bother me!
8- I mean I don't sleep so this could on for hours!
9- I bet you'll get tired of this before I will!
10- Are you asleep on your keyboard? Now that's just rude.

Okay now that the new ones are up to speed, let me continue with the talkie talk talk. So last year we all opened up our lovely gifts. We got so much fun stuff. My sis had sent goodies for me and mini-me. My brother and his girlfriend sent goodies for B-Dude and hubs. So as the night wore on I got to wondering how the guys scored Turtles and we didn't. Our goodies didn't seem as "special" as Turtles. I mean I love me some Turtles. So now I'm thinking wow, why didn't I get any. By days end I was really rather bothered by the whole thing and it virtually ruined my Christmas (not really but it adds so much to dramatic effect right).   So my Christmas was spoiled completely by this lack of Turtles. What's a girl to do? Well this girl got a little crazy. The next day hubs and B-Dude were off somewhere, so me and mini-me were watching a movie. She wanted a snack and we scrounged around but were sick of all the goodies in the house. So I started to eye the guy's Turtles. I thought oh what the heck we'll just steal a couple out of the box and they'll never know right. Well, the horror of it, they hadn't even opened that precious box of Turtles. Who in their right mind would not open them immediately? Not anyone who deserves Turtles let me tell you that. I was so outraged I decided right then and there I was going to open them and have one and to heckaroo with the boys and their anti-Turtle ways. (more dramatic effect, I just REALLY wanted a turtle) So I mischievously opened the plastic and heard the angels sing as I opened the box. I swore just one for me and one for mini-me. Yah, not so much. We each had two. I slipped the box back under the tree and waited for the guys to notice. Next day rolls around and no mention of the Turtles having been ambushed. So that night the guys were watching hockey or some other lame sport downstairs, so me and mini-me got the munchies as we usually do while watching tv. I jokingly said Turtles would be nice and mini-me got all excited. So what's a mom to do right? I mean I had to. It's my duty as a mom. So I swore one only. Yah

I swear hubs is going to start using Ricky Ricardo's line soon. "Lunie, you got some splainin to do"!

Alrighty roo, on to the bark. I used my usual recipe then just tossed stuff on top. It ain't rocket science folks. Just bark. Easy peasy. Feeling your pants get squeezy! When that happens lay off the bark a bit. Or get bigger pants. 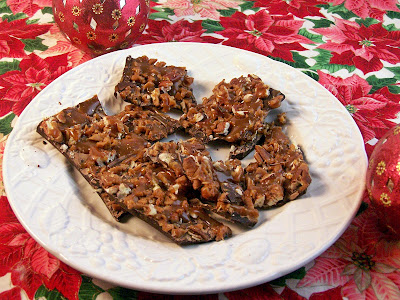 I like to call this "Bigger Pants Turtle Bark"!

Inspired by Epicurious, Baker's Royale, Goodies by Anna and KerryCan on Etsy 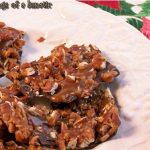 Print Pin
No ratings yet
Author Cravings of a Lunatic 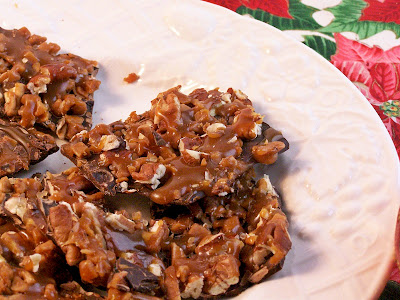 Yup, this is let your pants out, hide every one's share kind of stuff. This is so good I can barely stand it. Now that I can make my own Turtles I shall never need to steal it from hubs and son again. I may still steal it just for fun but I won't "need" to. Yup, that's how we roll up here in the Bee household.

My other Christmas baking posts for your viewing pleasure: