Braised Salmon with Mushrooms, Potato Purée and Watercress, this recipe is spectacular. A bit of work but totally worth the effort. Try it for yourself!

Today I have the distinct pleasure of welcoming my good friend DB back to Cravings of a Lunatic. DB blogs at Crazy Foodie Stunts, and is a very dear friend of mine. I adore this man's perspective on food so very much. He is constantly challenging himself to try new things, and explore new culinary worlds. I really dig that about DB.

You may remember DB, he's been around the blog a time or two. I like him so much I keep inventing him back. A couple of years ago he guest posted for me while I drove out to the wild west with my family. He made Homemade Granola and it was freaking amazing. I also featured DB on my Burning Down The Kitchen Series, and I made his Bucatini All’Amatriciana. It was so crazy good I've actually made it a handful of times. DB also invited me to be his guest on his new series, "Adding Some Class with". I happily made some Crème Brûlée for him, that's about as classy as this chick gets.

I am absolutely thrilled DB agreed to swing by this week with a recipe. This man is welcome on my blog, and in my kitchen any old time he likes. Hoping we get a chance to meet this summer. I'm trying to talk him into bringing the family to Florida for a conference. I always hear about his family on his blog, and Facebook so it would be so nice to meet them. I am really hoping we can both work it out to go to the Food & Wine Conference. I'm sure it would be a ball, tons of food bloggers, and all our Sunday Supper peeps in one place. That's just too much foodie excitement for this gal.

Now while I go lounge about on my week off, I welcome back my good friend, DB. Please treat him like family, I mean that's what us foodies are really. One big, giant, happy, well-fed family.

Hello fellow Cravings of a Lunatic readers! My name is DB, but I'm also known as Foodie Stuntman. You may have gotten a little more familiar with me over the course of the last couple of months because Kim featured me on her Burning Down The Kitchen series in January and then in February I asked Kim to be my inaugural guest in my Adding Some Class with... series where I invite fellow bloggers to demonstrate why I love reading them.

A central theme between these two exchanges is that I thrive on food that challenges me in some way, so I knew I had to bring my "A Game" when I volunteered to guest for her here, so I thought I'd use this opportunity to bring you into my world. Since I referred to The Flavor Bible and Think Like A Chef when Kim interviewed me, I used the two books to create a dish.

Since Kim had requested a seafood dish, I was originally thinking cod partially because it had yet to appear on my website but I had some difficulty with the flavor profiles The Flavor Bible was giving me. Mrs. Stuntman suggested salmon but I was initially reluctant because it's so common until I found the flavor affinity of salmon, potato and watercress. Mushrooms were also highly recommended.

One of the reasons I chose this dish is because it's an unusual cooking technique, given the protein. Normally braising is used to break down tough cuts of meats such as beef short ribs, lamb shanks and pork shoulder but salmon doesn't meet this criteria, so it's preparation method appealed to me. In addition, the mushrooms that accompanied the salmon took considerable attention, but I welcomed the work.

Despite my efforts, I feel the dish could have been better. I'll go over these issues later because any discussion of them would be pointless without the recipe, but first my challenge. In each of my dishes I publish, I always set out with something I want to achieve so...

Prepare a seafood dish with a fine dining presentation to demonstrate my technique-driven philosophy.

For the mushrooms and salmon, I used the recipes from pages 110 and 113 through 115 of Think Like A Chef by Tom Colicchio with Catherine Young, Lori Silverbush and Sean Fri. I adapted the purée from Cooking Channel's website and the watercress from Food & Wine.

Braised Salmon with Mushrooms, Potato Purée and Watercress, this recipe is spectacular. A bit of work but totally worth the effort. Try it for yourself!

Recipe credit to Crazy Foodie Stunts, adapted from from these sources: Think Like a Chef Food & Wine Cooking Channel

In a word, no. I ran into issues marinating the mushrooms. As I was cutting my leeks, I noticed there was a lot. I was even supposed to include a small chopped onion in the mirepoix but I omitted it because I was going to have a difficult time fitting all of the vegetables into my pan as it was. Additionally, I was unsatisfied with the shape of my fillets. I didn't realize they were so narrow until I got home with them and didn't have time to return them.

Regardless of the dish, I'd like to thank Kim for having me back. It certainly was a pleasure to be here. 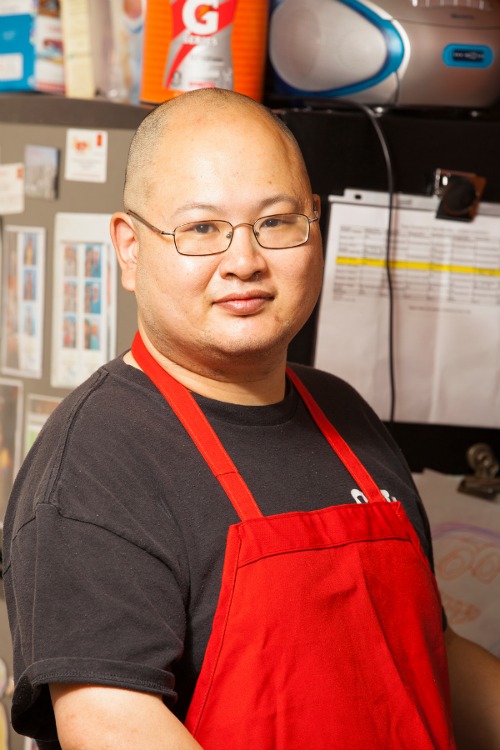 A huge thank you to DB for coming to my aid once again. It's so nice to be able to count on my foodie friends when I need to step away from the blog for a bit. You always bring your A-game, each and every time. I happen to love salmon, it's once of those dishes that impresses every single time. I grew up fishing. and salmon was one of my Dad's favourites so we ate a lot of it. It's still one of my favourites today.

More embarrassing fishing photos courtesy of my painful past, I mean, my youth: 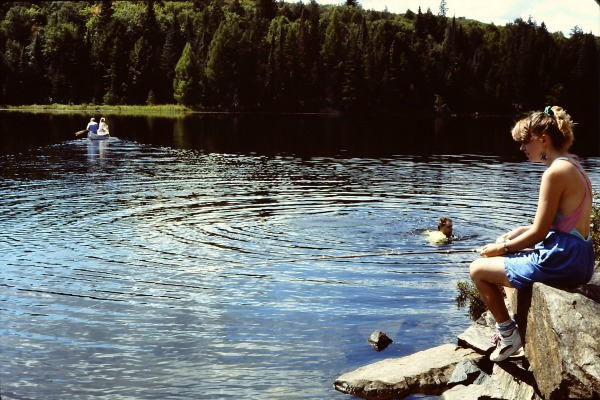 Um, er, ah, there's no explanation for the hair. Or the outfit. Or the shoes.

Proof that we just keep reeling in every generation to the canoe traditions: 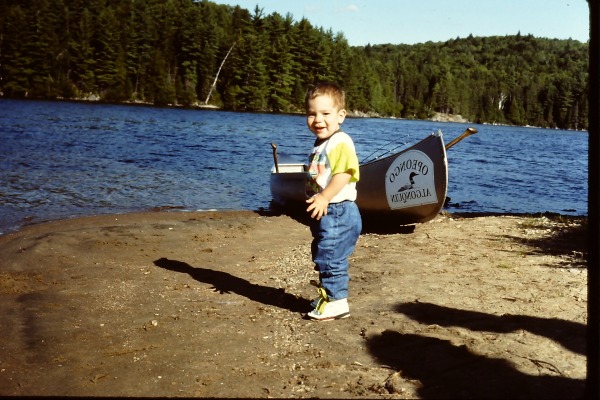 That young hooligan by the canoe is my son, B-Dude. Every where we go there must be canoes. And bad fashion sense. Who dressed this kid? Or yah, that was me. My bad!

The plan for my week off was to build a custom pantry. We tore down a wall in the fall, that lead to some rearranging of the house. We have a long wall we've reserved for a giant wall of shelves. I need more pantry space for all my mason jars. So we decided to build some storage. We are even making a sliding barn door that will hide the jars, but also double as a privacy door for the hallway that leads down the bedrooms, and bathroom. When we made the house open concept we realized anyone can see all the way to the back of the house from the entrance. So sneaking out of bed with no makeup on when you have house guests becomes impossible. Hence the impending barn door.

However when I booked this week off I didn't realize my daughter, mini-me, was going to be writing exams. You cannot build a wall that requires tons of banging and crashing when a University student is studying for mid-terms. So my week off was ill-timed. Never one to turn down a golden opportunity I've dubbed this week "Kim's week-o-rest". So far it's going swimmingly. Hopefully next month's week off is timed a bit better.

Make sure you swing my DB's blog, Crazy Foodie Stunts. While you're there make sure you follow him. You can also stalk him on Facebook, Twitter and Pinterest. He's a great guy to stalk. He's always making amazing recipes. Stalk your way to a full belly!

Seafood Week continues tomorrow with another amazing recipe. Keep tuning in all week.

This post contains affiliate links. Any purchases made through them is appreciated. It helps support my websites and the free content I provide. Thank you for your support and help along the way.