This Cheeseburger Ravioli Burger recipe is a burger stuffed in dough, then smothered in sauce. Yes, you read that correctly! 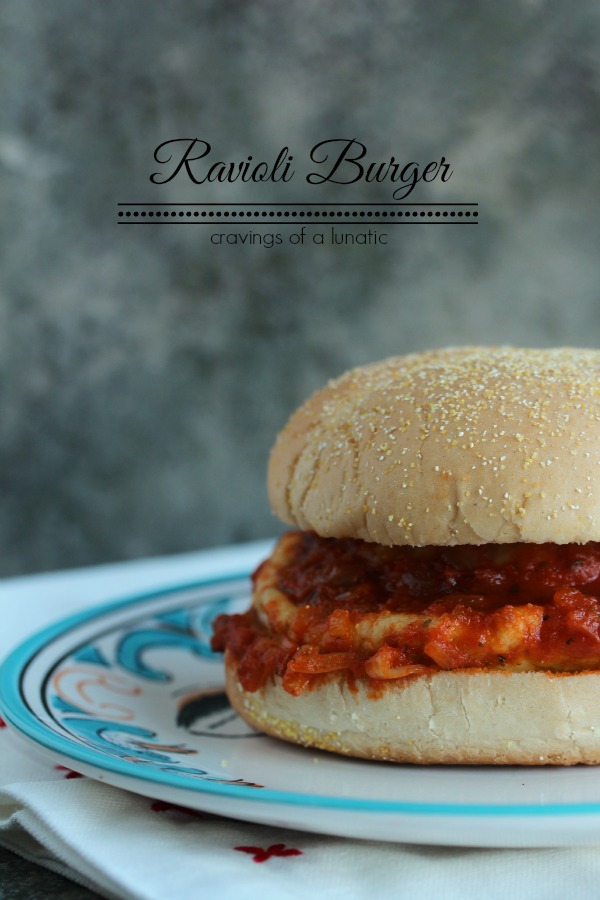 Your eyes do not deceive you. That is, in fact, a burger stuffed into dough. A burger ravioli, and not just any burger ravioli, this sucker is filled with cheese and smothered in sauce.

Now don't freak out and go running in the other direction. This Burger Ravioli will surprise you, I promise. I'll be honest with too, you have landed on the food blog of the pickiest eater in the world. So if I can handle this bad boy so can you. 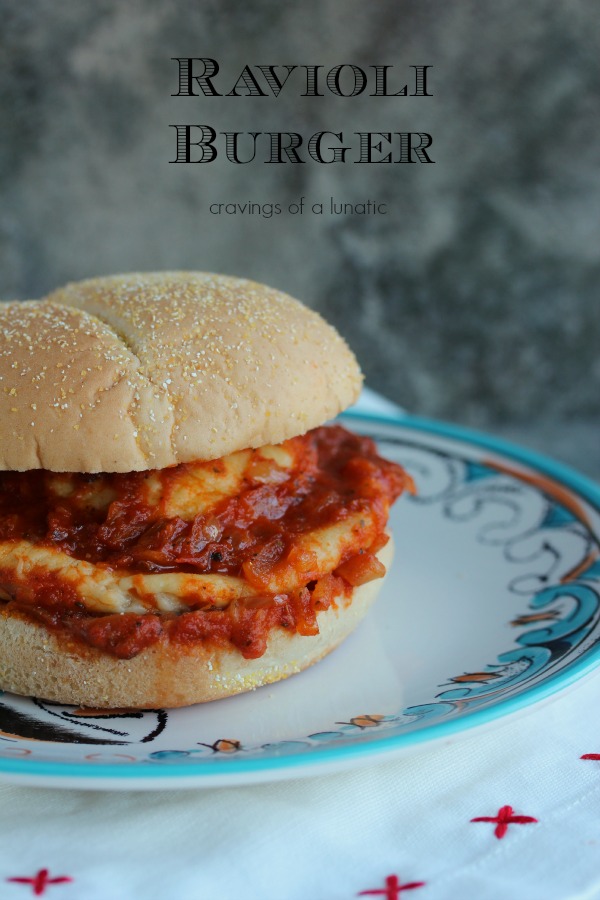 I was asked to review Stuffed, The Ultimate Comfort Food Cookbook by Dan Whalen. Page Street Publishing sent me a copy to critique and test some recipes from so I could give my opinion on it. They've also graciously provided an extra copy for 1 of my readers. It could be you.

So first you probably want to know the low-down, nitty gritty on this cookbook. So let's start from the beginning. The author is Dan Whelan who blogs at The Food in my Beard. I'm sure some people think all us food bloggers know each other, but that's just not the case. I don't know Dan, we've never had the pleasure of meeting. I know his blog from seeing it pop up on stumble upon when I'm goofing on there. My dad had a beard so there's always that moment of me giggling over his header when it pops up. This has nothing to do with the book or review, just a little bit of trivia for you. I promise I won't quiz  you on that later.

Moving on. There are a few basic things that I want in a cookbook, and this is strictly a personal thing for me. You might look for something else entirely. But since this is my blog I'll tell you what works for me. The first thing I'm going to do with any cookbook is look at the spine. I know, it's weird. I dislike binder style cookbooks, I really dislike those half-binder type, have you seen those? The front is coiled but the back is a book. Those confuse the heck out of me, and no matter who the author is I recoil from them immediately. Dan's book is paperback but it's a good size one, and when I flip it around to test how fast I'll bust it I'm convinced it will stand the test of time. I am a dropper folks, so all books must be sturdy since they will hit my tile floor frequently. It's the perfect size and weight in my hands. This also oddly matters to me a whole bunch. I'm sorry, but it does. I read cookbooks like some people read novels so it's important they feel comfortable in my hands. Nothing worse than a cookbook that is too large, too heavy or the cover is a weird material that makes you teeth hurt like someone scraped their nails on a chalkboard. None of this has anything to do with the recipes inside but I'm judging a book by it's cover. And it's weight, size and binding. Those all have to get checked off the list before I'll even open the thing. I'm a tough critic, what can I say.

Now let's get to the inside of this bad boy. It starts with a great introduction where we get to know Dan better. You'll feel like his pal by the time you finish reading it. Which I dig. I'm not the kind of gal who needs her cookbook author to be an uber-famous chef. I'm looking for real food, from real people, that other real people can actually make. I live in a culinary black hole so cookbooks with fancy ingredients would be a complete waste of my time. Those things are not accessible where I live.

Something else that is super important to me when making a decision when to buy a cookbook is the photos. I want lots of them. I want the book jammed back with food photos, and personal photos. My goal is to get to know the person as well as the recipes. Dan's book has photos, and they are great quality photos too, but there's not enough of them for my taste. I'd say 1 photo for every third recipe was the average. I know cookbook companies have a hard time printing an affordable book if there is a photo on each page. They look at the bottom line. However most people want to see a photo of the finished dish so they know if they are doing it right. Not all cookbook buyers are trained chefs or bloggers. Lots are new cooks who want those photos as a guide. I think it's important to have a photo with each and every recipe.

The book is broken into chapters. Lots of options for stuffing your food, and your face. Here's some highlights from each chapter.

These are just some of the amazing stuffed recipes Dan has whipped up for the cookbook. It's filled with really cool flavour combinations that push boundaries. If I can be frank, and you know I will, it reminds me food truck cuisine. It's edgy and outer limits for some people. However there are so many people who love the idea of taking things you wouldn't think go together and making them work. Food trucks are famous for it. Dan's book reminds of that style of cooking. Comfort food for the risk taker, for the person who doesn't just want a plain bowl of pasta at the end of the day. If you are that kind of person, and I'm thinking some of you are, this book is for you.

I chose to make Dan's Cheeseburger Ravioli Burger. It intrigued me so much I just had to try it. I'll give you the low-down on what I loved about it, and what I didn't. You know I don't pull punches here. Not my style.

I love the idea of this recipe. I'm a huge burger girl, I have a grill site so burgers are definitely high on my "must eat regularly" list. I'm also a huge carb girl, I love pasta more than life itself. Not even kidding. So combining the two intrigued, yet frightened me.

The next day I decided to make homemade dough. This worked out better. But my issue with this is if you're like me you make a monster sized burger, but your pasta machine does not make monster wide pasta. So what I learned was make smaller burgers, or hand roll dough so it's wide enough. Otherwise the burger will not fit in the dough. I chose to downsize my burger so it would fit. Make sure you get a good seal. Attempt number one was not sealed well enough and I had water in my burger, not cool. I'm usually better at wrapping but that sucker got away from me. Attempt number two was perfect. No water, sizing was bang on, and it cooked perfectly.

I also found that popping the ravioli in a saucepan with the sauce and cooking it for a minute or so worked better than just pouring it on the bun and the burger. The first attempt at slapping these suckers together had the ravioli sliding off the bun when I tried to walk away with it in my hand. It seems to stick better if you cook the ravioli in the sauce for a bit. Gives it more staying power.

As for taste, I was impressed. I'm going to be honest, I thought I would hate it. It was pretty out of bounds for me. I could have picked something safer but I actually really enjoy trying new things. So this was a great experiment with fusion food. I was pleasantly surprised. I give Dan two thumbs up on the recipe. I used his dough recipe just to make sure the recipe came together the second time perfectly. His dough recipe was great, easy to make and not overly complicated.

Now my thoughts on who should buy this book. Anyone with an adventurous spirit. It's a departure from what you would consider "normal" comfort food, but that's okay. That's part of the fun of this book. I will say this, because I adore my readers and always feel the need to be 100% honest at all times, I think the book is not for beginner cooks. Some of the recipes could be tackled by a new cook, but most things we stuff take a little finesse and know how. There's some recipes that would be easy enough for a beginner, but any of the pasta recipes I'm not so sure. I would say this would be a book for intermediate cooks. Someone who cooks enough to own a pasta machine, food processor or stand mixer would be who I would target this to. Also anyone who loves to try new techniques and flavours. This book will definitely blow your mind with the coolest fusion food around. Dan really has a talent for taking American cuisine and turning it on it's head. And I dig that about him. 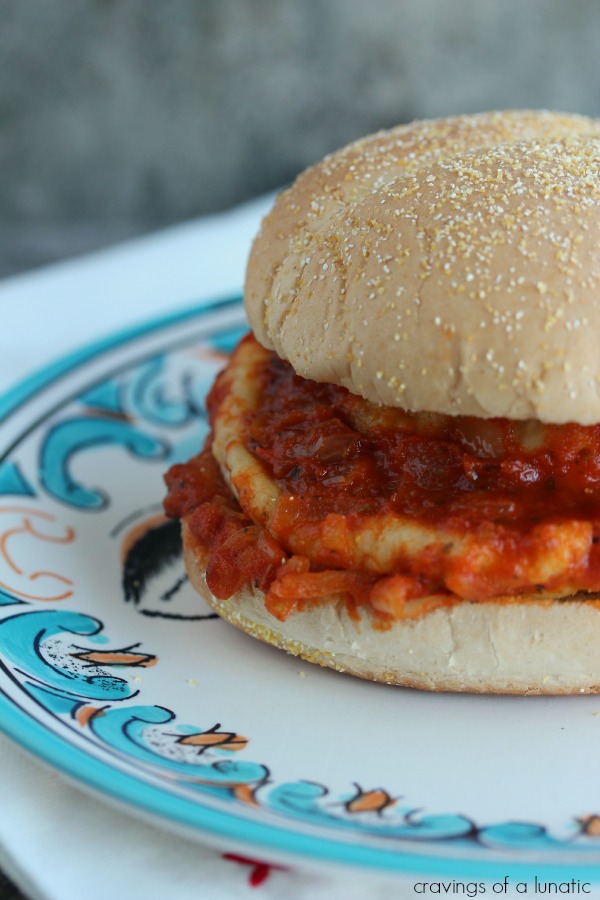 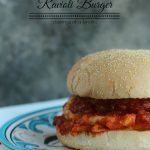 For the Pasta Dough:

For the Pasta Dough:

My notes and changes to suit our taste: I made one batch Dan's way. Fabulous. But we're not huge ricotta fans. So i swapped the second batch out for mozzarella. It's the cheese we like best even though it's not traditional for ravioli or burgers. I found popping the ravioli into the hot sauce for a few minutes after it cooked in the water helped the texture tremendously. It kept the ravioli from slip-sliding off the bun. I think these would be wicked good as sliders. Just sayin'! Idea for book two perhaps, Dan? I think an Asian fusion sliders would rock. 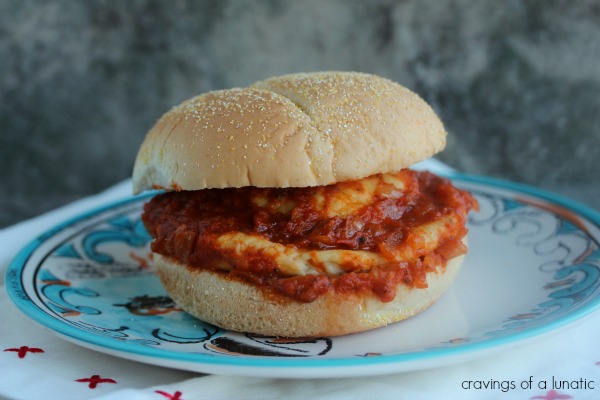 For anyone who is new to making pasta I suggest you head over to Dan's site where he has a great step by step photo tutorial. It's super helpful for folks who have not made their own dough before. Your burger will look sort of like the photo below before hitting the water. This was pre-fork seal. 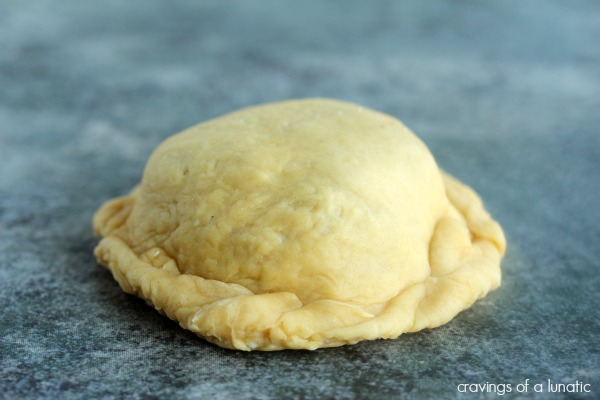 See, neat right. Below is a photo of mine cut open. This was one of the rarer versions. I cooked mine twice as long for the last batch since I'm a well done kind of gal. 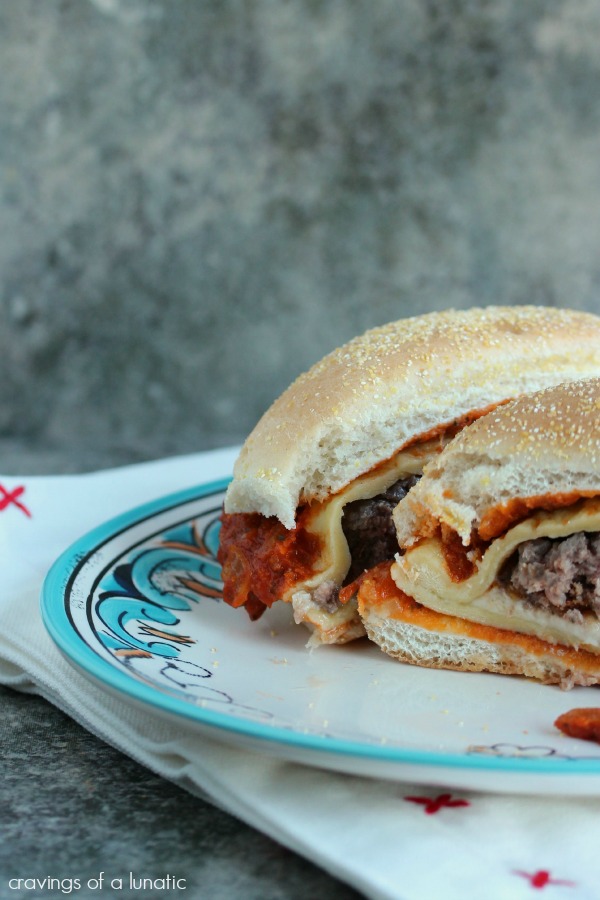 This one was a bit rare for me. I like a really well done burger. But this gives you a good visual of the inside of this burger. You can see the dough is slightly thicker than a normal ravioli. That's important to the integrity of the burger. A thin dough will not hold up well. Trust me, I tried it. Dan is right about it needing to be thick. 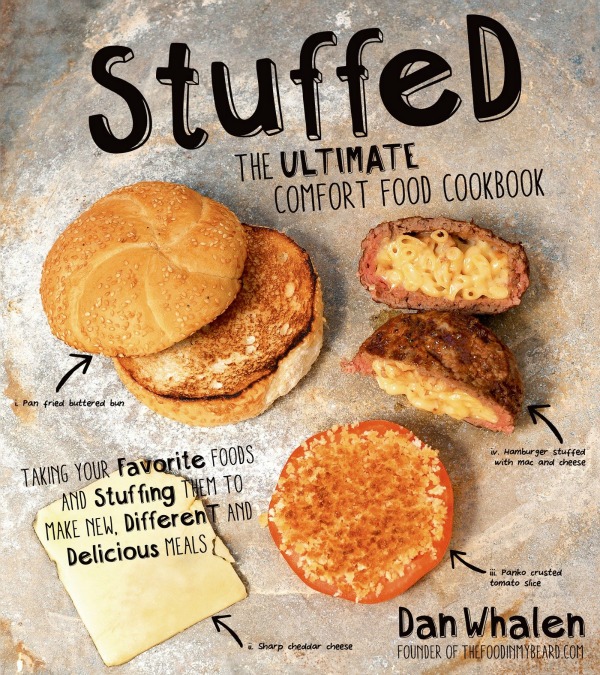