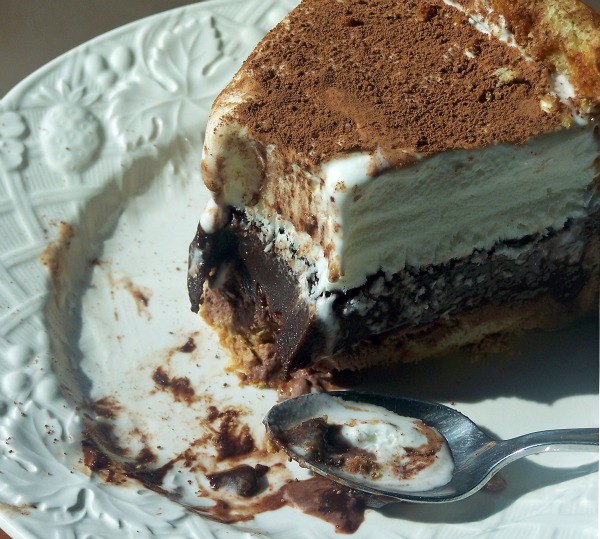 Yah that was a mouthful I know. But there was just no other name for this thing. I had a seriously bad experience with this torte. It started off great and I was feeling oh so full of myself. Then bad things started to happen. Yet there was no turning back. I am not a quitter. I will not throw in the towel. I will not....oh whatever, I just didn't want to waste good ice cream. That's the bottom line.

So this one can be done with NO ICE CREAM MAKER!!! I know some people don't have them. This is for you folks. Those of you who have not jumped on the ice cream maker bandwagon. You could make your own ice cream for this dessert. But it is totally acceptable to cheat and use store bought. I did this just to show you not everything has to be hard. Bah, maybe that was karma for me. My ice cream maker got jealous and had a single white female moment. It conspired against me and ruined my chances to make a torte without it. Ah, ice cream maker, I still love ya. But sometimes I just gotta see other kitchen appliances. It's not you, it's me. Don't take it personal. We can still be friends.

So this is going to be the anti-recipe. All the things not to do. As I learned all the things NOT to do when making ice cream cake/torte. The first thing you should always do, and this applies to every recipe, is to read the whole recipe all the way through. I am shocked anything of mine ever turns out as I rarely do this. You'd think I'd learn. Second thing to do is give adequate time between the layers. Do not try to rush. It will go horribly wrong if you do. Do not double batch your chocolate sauce, I did and should not have. It's too heavy and makes the bottom layer pop up. Also it's just too much. I am a big fan of too much on most occasions but here I'd say pull back a bit. Don't overdo the middle layer. And here's the kicker, the best advice I can possibly give you. When you put it in your freezer after half a day of working on this thing, make sure there's enough clearance so your door doesn't cut off the tops of all your ladyfingers. This is of utmost importance people, seriously, this thing looked like I took a weed whacker to it in the end. There's more but I'll get on with it and pop some tips in along the way. So here it is. I found this in Williams Sonoma Frozen Desserts cookbook. I adapted a bit. Enjoy!

The Everything That Could Go Wrong Did Ice Cream Torte:


Prepare a 9 inch spring form pan by lining it with plastic wrap or parchment.


Arrange the ladyfingers around the outside of the pan with rounded side out, then line the bottom.


Brush the water and vanilla mixture over the ladyfingers. You can use alcohol for this step if you'd prefer.


Stick in the fridge for about 30 minutes.

Once it's soft (you can toss it in the mixer if it needs help) you can pour it into the pan. Smooth it and stick it in the freezer for about 1 to 2 hours. (tip-the ice cream should bring it to half full)

Take out of the freezer and spread the chocolate sauce over top. Pop back in the freezer for 1-2 hours.

Soften your vanilla ice cream for next step.

Take your torte out of the freezer and add your vanilla layer. Smooth it out. Stick back in the freezer for 3 hour minimum and up to 24 hours.

Remove and release from spring form pan and garnish with cocoa or anything else your heart desires.

Cut and serve with a smile.


Chop your chocolate and set inside a heat proof glass bowl. Set aside.


Put your corn syrup and sugar in a saucepan. Place over medium heat and stir until sugar dissolves and mixture is bubbling.


Stir in cream, cook over medium heat while stirring until mixture is smooth and large bubbles form around the edge. The mixture should foam in the center. Once it foams up you can remove from heat.


Stir in the vanilla. Stir until smooth for about 1-2 minutes.


Can be used or stored. 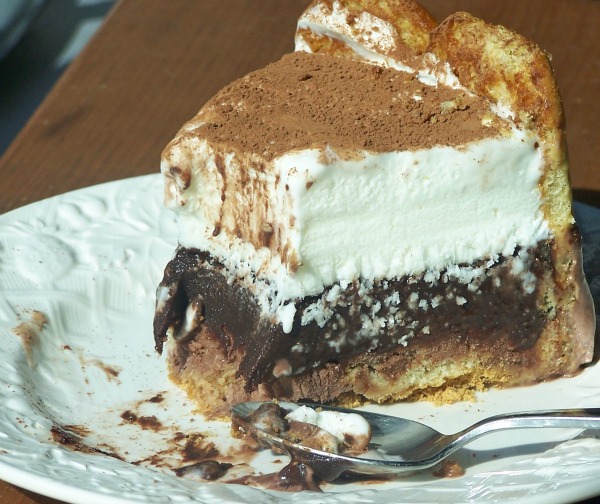 TIPS OR WHAT KIM DID WRONG:


Mistake #1- Buy enough ladyfingers. I did not.

Mistake #2- Decide on a way to soak ladyfingers, if you can't have alcohol, ahead of time. I did not.

Mistake #3- Cut the bottoms of the ladyfingers to make them sit level. It took me a ton of tipping over to figure this out.

Mistake #4- Make sure you let the bottom layer freeze enough. Otherwise when you put the chocolate on it will pop through. I did not do this so I am warning you instead.

Mistake #7- Make sure you let the sauce harden in the freezer long enough. Otherwise you ruin pretty layers....again.

Mistake #8- When you put it in the freezer make sure there is enough clearance or you will chop off the tops of your ladyfingers as I stated before. It's an ugly mess. And you'll feel bad and your cake won't be pretty.

Mistake #9- Let the ice cream melt just a teeny bit so your cocoa sticks. You'd think I'd know better after the whole sugar on dry  muffins a la Paula Deen incident. But apparently I am losing it and forgot.

Mistake #10- Okay here's the biggy, the utmost of importance. You must listen to this advice. It is so important. Make sure your spring form pan is not a crappy piece of old metal that breaks at the most important time of the procedure. If it breaks before you release the cake well good luck getting it out. I know as this did happen to me. I knew they were well used and I had beaten the tar out of them. But seriously after hours of prep and leading up to this special moment and it comes down to this.... and you cannot getting the freaking thing out of the pan as the mechanism breaks. OMG, I was not a happy camper. I had to pry the thing out with butter knives. Yup, sure looked so good by the time I was done.

So there you have it. I am nothing if not helpful. I swear this was like the little ice cream that could. I kept thinking about that children's book. This torte has some heart. It stuck it out until the end. It was battered, bruised and leaking chocolate ice cream everywhere but it held out for me. So I suppose the honking mess I made was worth it. Or I could have just gone to dairy queen and been done with it. *sigh*

Hope you enjoy this post and it makes you hungry and inspires you to go make some ice cream. It's so fun to make your own. There's 2 no ice cream maker recipes here so there's no excuse to not make your own treats. Hope you make the most of the rest of your weekend.