This salad is a great make-ahead option for kitchen parties. The lemon, dill and sour cream add a gentle tartness to the dressing, which is then balanced by the sweetness of the lobster and corn. 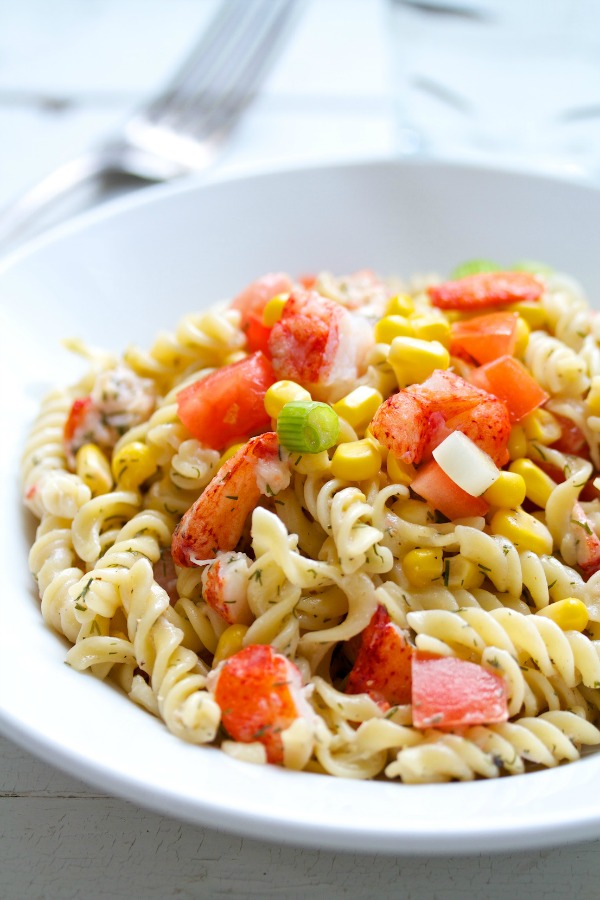 Today kicks off Seafood Week. I'm taking a week long hiatus to get some projects done around the house. Which is basically code for "I'm going to spend a week watching everything humanly possible on Netflix while I lounge around in my jammies". While I'm  lounging around in jammies stuffing chocolate in my piehole at rapid speed, I asked some of my favourite bloggers to guest post for me. I'll be doing a second Seafood Week in April as well because I have lots of amazing friends who were willing to help a sistah out.

I had to kick off Seafood Week by inviting my favourite East Coast blogger to swing by to entertain you. If you don't know Movita Beaucoup you are in for a real treat today. Movita is wildly hilarious, and wickedly talented. She's also one of my favourite people in the entire world.

You may remember Movita from the guest post she did for me while I jotted off to Alberta a couple of years ago, she made an amazing Seafood Chowder. She also baked me the coolest Horsey Cake last year for my birthday bash. Movita is a legend, all who know her love her, those who know her well invite her to poke fun of them every chance they get. She's so damn good at it. I love this woman! Please welcome Movita Beaucoup! 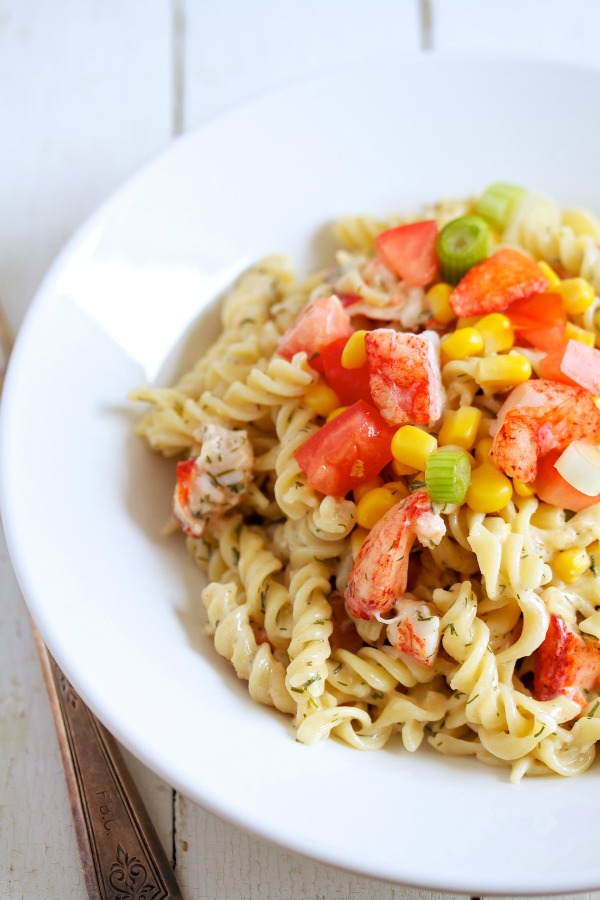 Let me begin by saying that I was extremely flattered when you asked me to do a guest post for you. It’s always nice when someone trusts you enough to do all their work for them. But when you mentioned that you wanted a seafood recipe, it gave me claws for concern. I mean, you’re allergic to seafood! Which is weird, given that you keep insisting that you have East Coast genetics. I guess any fin is possible, but as someone born and raised in Nova Scotia - a bonafide Maritimer - I think I know a thing or two about spotting a fellow Bluenoser. And Kim? I don’t quite sea it.

First, I’ve never heard you mention kitchen parties. I’ve heard you mention Burning Down the Kitchen, but I can assure you, it’s a totally different thing. Kitchen parties are a favourite in these here parts, as the galley has always been a focal point of Maritime lifestyle. This cod be due, in part, to the fact that a good number of us have been banned from our local pubs.

Second, I doubt you’ve ever hosted a ceilidh. Ceilidhs are like kitchen parties, but people whip out fiddles, sing and get jiggy to traditional Celtic music. Throw in some drinking and storytelling? People reely come out of their shells.

Third, you don’t drink. To be fair, this would prevent the barfing that sometimes occurs at ceilidhs. But I guess imagining that we’d one day share a bottle of Keith’s was fishful thinking.

And finally, we have your seafood allergies. Just how allergic are you? I’d feel shellfish keeping this pasta salad to myself. Could you try some just for the halibut? This salad is a great make-ahead option for kitchen parties. The lemon, dill and sour cream add a gentle tartness to the dressing, which is then balanced by the sweetness of the lobster and corn. Unlike some pasta salads, it is not overly dressed or dripping with mayonnaise. The veggies in this little song make it a lighter, fresher option for breezy days by the ocean. It is terribly easy to make - even if recovering from one rager of a ceilidh. It is lovely as a main, alongside your favourite meal, or as a mug-up before bed.

Yes, you could argue that one need not reinvent the whale, or that including lobster in a recipe is just a pathetic attempt at fishing for compliments, but I think this pasta salad could help people get in tuna with their Maritime side.

Truth be told, friend, maybe you are a Maritimer deep down in your sole. Heck, half of the stereotypes I’ve mentioned aren’t true anyway. Not all Maritimers are hard-drinking fishermen, nor are we birthed playing the fiddle. But if the best of the stereotypes are true - that we are some of the friendliest people you’ll ever meet, that our fondness for the ocean runs deep, that we love to tell tall tales, and that we like our time spent in the kitchen best - I think you’d fit right in. 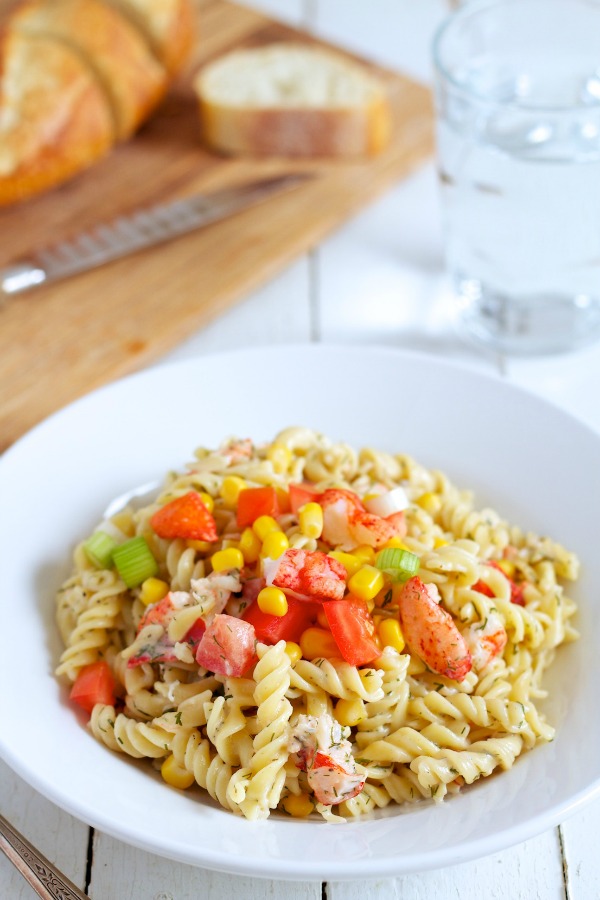 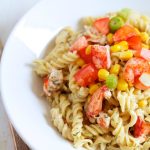 This salad is a great make-ahead option for kitchen parties. The lemon, dill and sour cream add a gentle tartness to the dressing, which is then balanced by the sweetness of the lobster and corn.
Servings 4 to 6 servings, more if serving as a side

Recipe Credit to the lovely, and talented Movita Beaucoup Thank you so much for guesting posting for me Rachael. xx 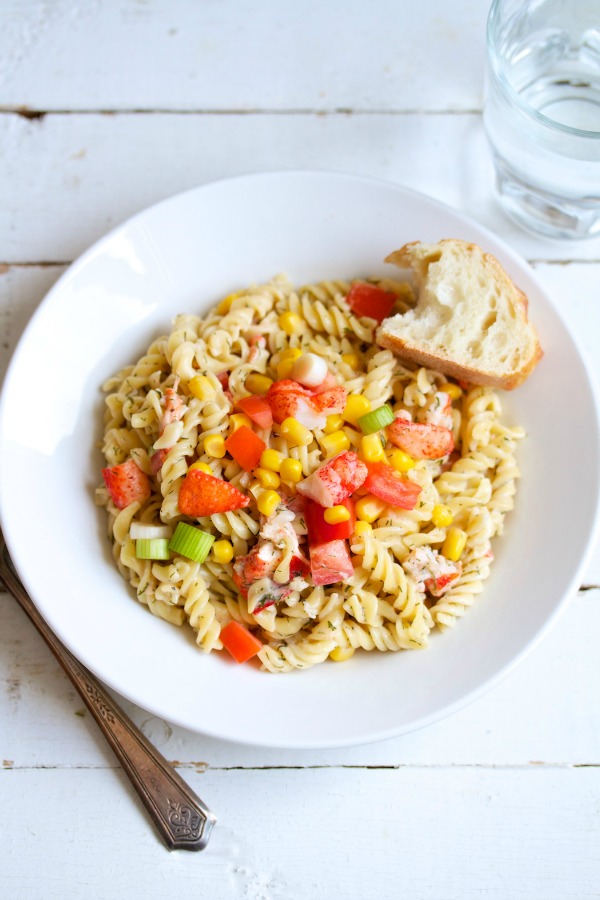 Thank you so much to Movita for swimming by today. I laughed, I cried, I snorted pepsi out of my nose. I even wore my lobster jammies in Movita's honour today. The perfect kick off for Seafood Week.

Just because I love Movita so very much, here you go: 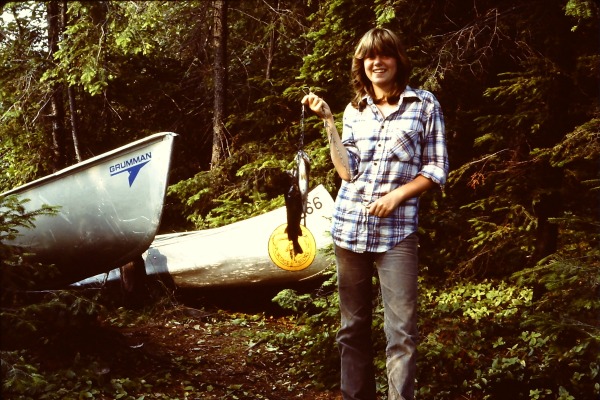 And that, my friends, is how you style your hair when you go fishing in a canoe. I was one seriously sexy fisherwoman back in the day!

One more to ensure I fully embarrass myself: