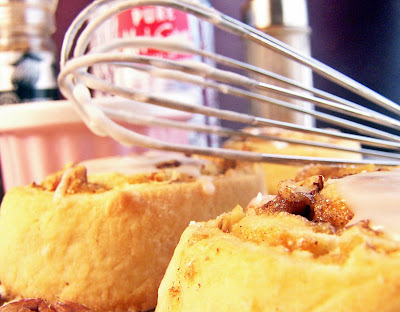 Hi folks. Going to try to make this snappy. Pretty late here in Canuckland. Need my sleep. This burning the candle at both ends stuff gets tiring some days. I actually fell asleep on the couch tonight. I never fall asleep anywhere but my bed. I was watching Gilmore Girls with mini-me and talking to Ann from Cooking Healthy For Me online and next thing you know the show was over and Ann was left hanging mid sentence. Yup, I'm a keeper folks.

So this comes in with an explanation. A pathetic one but one just the same. I'll give you the low down, the down and dirty, the real deal. You want the truth people. Well... you can't handle the truth. Okay, so I've always wanted to say that. Jack Nicholson, guy is a genius.

Awhile back I was hearing and seeing some buzz about Burwell General Store and the recipe swap held there. I was intrigued after seeing Chef Dennis do them. So I emailed Christianna  and expressed some interest in participating. Yes I realize that is pretty bold of me to just email and ask about it. It's how I roll people, you should be figuring that out by now. Anyhow Christianna is a super nice lady and I was so excited to be able to be included. I mean over the moon, so happy I could dance a jig and well, probably did. Although there is no proof. If you see a jig on youtube that is NOT me.

Cut to this weekend. I was a cooking machine. I had fallen so behind during some time off that I was struggling to keep up. I had a plan for something coming up this month and wanted to wrap up all the things I had on the go. I have always been a blogger who flies by the seat of her pants. I make dinner, I edit pics, I write a post and send it out there. All within a short 2 to 3 hour time line, cooking included. It's just how I've always done it. But I realize now it's just not enough time and I have no saved up recipes for when life happens. Plus it makes it hard to be organized and on top of things. I am hyper organized in every other aspect of my life. So the lack of it here on the blog is surprising. I think of it like reality tv. You don't want to see what I ate last week. You want to see what I'm eating NOW. That is how I approached the blog. Until this weekend. When I had a light bulb moment brought on by a moment of total embarrassment.

What you ask could embarrass the Lunatic. Well as I was cooking up a storm all weekend and planning some secret posts I realized after the fact that the vintage recipe swap I had longed to be part of and was so excited about, had come and gone. I was all proud of myself for getting caught up and ahead of the game. Then as I was clearing emails I realized I had forgotten to make the vintage recipe. The one I coveted and longed to be part of. How could this happen? How could I do this? Simple explanation. I'm a dumba**! Okay so not very professional I know. But so wickedly true in this moment. So to Christianna and the rest of the group I apologize profusely. I am so sorry I was not on time.

Okay so it gets better. No really. You can't make this stuff up. I made a recipe last night. I often just toss stuff together and see what happens. I have to admit I rarely have something not turn out. Yah, well last night, big old el bombo. I made tarts and while they taste okay, they don't seem to come out of the pan easily. If I can pull one out tomorrow I'll post it so you can see. They taste like a butter tart. Pretty darn good but not quite as good as they can be. So not sure if I'll revamp them or not.

So today I pulled up my bootstraps, no really I did, I have a horse, bootstraps are real, they exist. So I pulled em up high and went into the kitchen to do this. I am so late to post for the swap but I wanted to make something anyway. I wanted to see what I could come up with. And after last nights phyllo incident of 2011 I needed to redeem myself. So this is it. This is what I made. I mean I am a Canuck for pete's sake, maple syrup runs in our veins. How could I pass up this opportunity to make something like this. I should have a gazillion maple syrup recipes. Somehow I don't, apparently I am a bad Canuck. Anyhow moving on. Here it is. Late, apologetic and hoping the swappers forgive my blonde moment. Most of them know me and know life has been a bit out of whack the last month or two so hopefully I am forgiven. Hope these rolls make up for it!

Here is the recipe we worked off of. Pretty shnazzy right! I was going to do a crumb cake but then I kept getting taking off in another direction. Hopefully this was okay. Being my first swap I was worried about venturing too far from the original. But I just got lead that way and followed. Lol!

Combine all of the dough ingredients in your bread maker pan and put it in your machine.

Once it's done, remove it and set it on a lightly floured surface. Let stand for 15 minutes.

Roll dough out into a rectangle, about 10 x 15 inches.

Now spread the butter over it almost to the edge. Leave a little gap of about 1 inch at the edge un-buttered.

Now sprinkle on your sugar, cinnamon, nutmeg, nuts and raisins.

Now roll it as tightly as you can so it forms a cylinder. Press edges to seal.

With a sharp knife cut this into pieces about 1 inch thick. You can also use dental floss to cut.

Once all cut, cover them and let stand for about 30 to 45 minutes.

Remove and let cool for about 10 to 15 minutes before glazing them.

Mix powdered sugar, milk and maple syrup in a bowl and whisk until smooth. 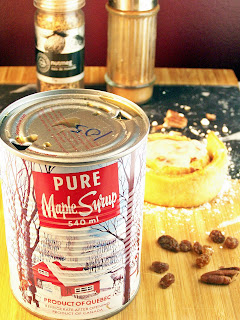 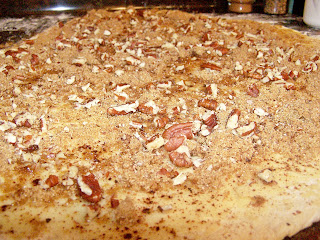 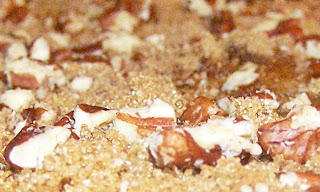 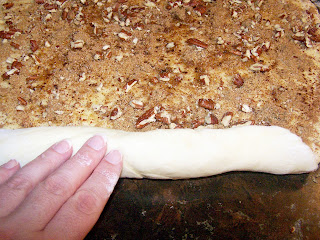 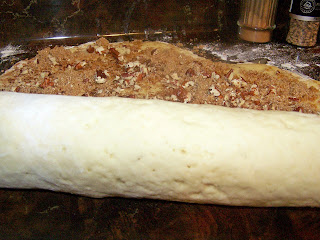 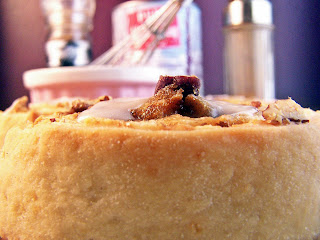 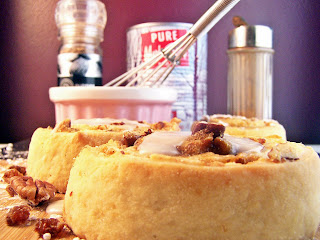 If I can give you a little advice, do not knead the dough after it comes out of the bread machine. I had not made cinnamon rolls in a long time and I forgot it makes these ones tough. It overworks the dough. Best to leave them alone. They'll get enough working when you roll them. They are usually a lot lighter and fluffier than this.

So again huge sorry to the swap crew. I promise next swap I'll be early, I'll be the first one done, I'll be chomping at the bit to post. Christianna thank you for being so sweet the other day.

Here's the other great people who participating (AND WERE ON TIME!) so make sure you pop by and tell them Lunie sent ya.