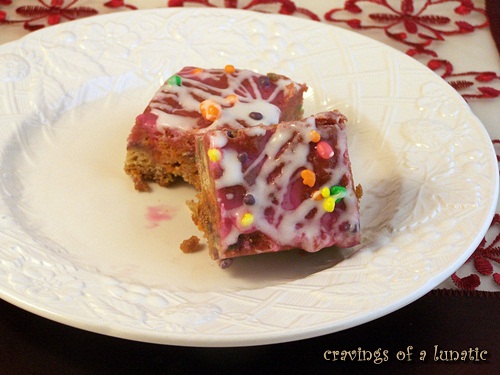 "I just wanted to say that I'm a nerd, and I'm here tonight to stand up for the rights of other nerds. I mean uh, all our lives we've been laughed at and made to feel inferior. And tonight, those bastards, they trashed our house. Why? Cause we're smart? Cause we look different? Well, we're not. I'm a nerd, and uh, I'm pretty proud of it." 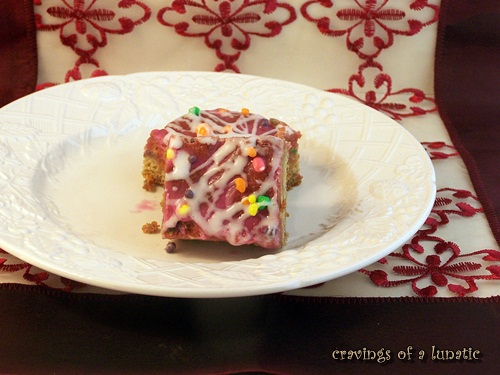 "I'm a nerd too. I just found that out tonight. We have news for the beautiful people. There's a lot more of us than there are of you. I know there's alumni here tonight. When you went to Adams you might've been called a spazz, or a dork, or a geek. Any of you that have ever felt stepped on, left out, picked on, put down, whether you think you're a nerd or not, why don't you just come down here and join us. Okay? Come on." 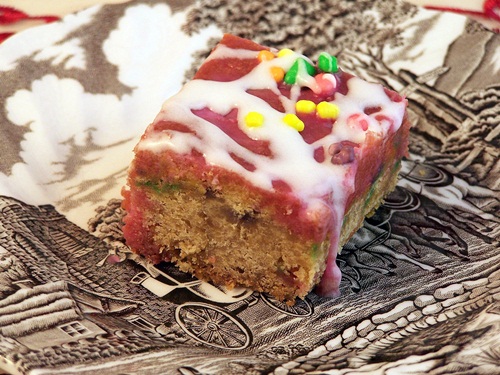 Don't ya just love that movie? Classic '80s flick. A little wild but hey, why shouldn't nerds be wild.

So I've been on a candy kick lately. It's not over. There's more coming. Just warning you now. So prepare yourselves. Get those toothbrushes prepped, you"ll need them. Maybe book a cleaning, perhaps a fluoride treatment. I can assure you it will be worth it.

For me these blondies just don't measure up to a brownie. So if you have a better blondie recipe feel free to let me know. I'd love to try another and see if it was just the recipe I used or if I am a blonde blondie hater. There's a fun tongue twister for you. Blonde bombshell bites blondie but brownies better! Say that 5 times. Fast!

Now don't get me wrong, these were good. Just not fall on the floor or jump up and down good. But certainly yummy! I thought the color of the nerds would bounce off them wonderfully which they did. I thought the nerds would add some fun to them which they did. I thought the nerds would also add some sweetness which they did. But something was still missing. So I tried drizzling them with a pink glaze. Then I sprinkled more nerds over top. I bit into one and still something was missing. So I drizzled white glaze over them and added some more nerds. I bit into it and something was still missing. You know what it is? It's chocolate. It's the chocolate that does it for me with brownies. So what I was missing was a brownie. But you can't make a blondie a brownie. So while I am disappointed in the lack of chocolatey goodness I am pleased with the blondie taste with the nerd explosion. I hope you try them out. Great way to get kids to eat a blondie instead of a brownie.

Okay now that I have a headache from all the tongue twisting going on let's just bop over to the blondie recipe. Enjoy, and watch the movie while you munch them. Great old movie. 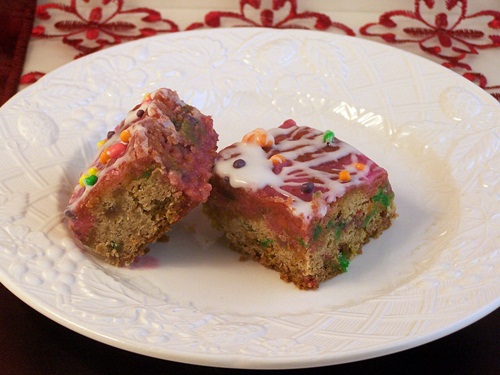 
Preheat your oven to 350 degrees.

Cream butter and sugar in a large bowl until light and fluffy.

Beat in your egg and your vanilla extract.

In another bowl combine flour and baking soda, mix.

Now take your dry ingredients and add slowly to creamy mixture. Fold in until dough becomes a bit stiff.

Stir in your nerds. Do not over mix.

Pour into pan and spread out until smooth. Tap your pan.

Bake for 25 to 35 minutes, it's done when you stick a toothpick in and it comes out clean. The top should be golden brown.

Remove from oven and let stand in pan for 5 minutes.

Remove and let cool on a wire rack.

Add some glaze over top. I just took a bit of icing sugar and added a touch of milk, and some red food coloring.

Toss some extra nerds over top.

Add a second layer of glaze when first is dry. Again just take a small amount of icing sugar (¼ to ½ cup) and milk (2 to 3 tablespoons) and mix. Drizzle over top and toss more nerds over it.

Cut and serve. (To nerds is preferred) 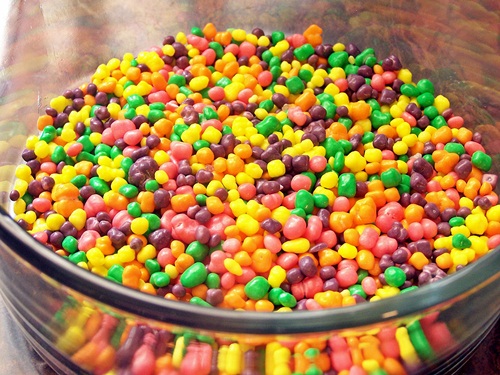 As you can see I made the pink glaze a bit too liquidy. Blondies but they had a little wet tshirt contest. How bizarre is that? Wrong on so many levels. 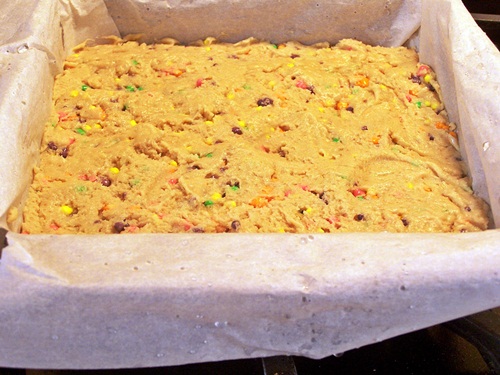 Even the batter was remarkable. Not that I ate any of it. Cuz that would be wrong!

Okay folks I am off for now. I am still a little shell-shocked from tonight's phone call from my kids. The call every parent dreads with the words you do not want to hear, "Mom, we've had a little accident." Can we just say OMG OMG OMG! Your mind goes to the bad place right away. First response is "are you alright, is your sister alright, is the other driver alright?" Everything else just does not matter. I don't care about the car or hubby being late for work as he's waiting for that car. All I care about is my kids are okay. That the other driver is okay. And everyone is. Thank goodness. My son was driving, my daughter was with him. They were coming home from school and had stopped at a comic book store. He rear ended a lady. A very nice lady who actually took the phone during a conversation I was having with Bray. She felt so bad as he was so upset about the whole thing. So she wanted to assure me they were going to do their best to help him out as she liked him so much and thought he was a nice kid. Her boyfriend is a car dealer so they are going to try to work out a deal so he doesn't get killed with costs. Very nice of her to be nice to him after he hit her. Even more so that they are willing to be kind about it all. So after many frantic calls to Bray and Kiana I was calmed and assured they were okay. I told them to go somewhere and eat so Bray could calm himself down. Seemed to help. They are home, everyone is okay but let's just say Mom is still freaked out. The thought of my kids being hurt is just too scary for words. Even though I know they are okay I am still shook up by it all. So I am going to veg until my mind quiets. Since you all know me so well, let's just say it, it could take a while. Lol!