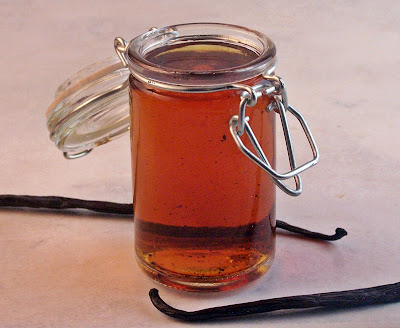 Hope everyone is doing wonderfully on this fine Friday. It was so sunny and mild today I thought I was dreaming when I went outside. Then I visited the horses and oh the mud, the mud is awful. Nothing like rain and melted snow to make for messy animals. Luckily they are cute so I cleaned them all up and came home dirtier than they were.

So I have a fun experiment for you. I did other ones in the summer. This one has been brewing for quite some time. I wanted to share it with you before Christmas but just never got to it. So I am here to present it to you today. But first a story. Oh come on now folks, you know by now you always get some wacky story with the recipes. You’ll like this one.

For those who do not know me well I’ll start this tale with a fact. I do not drink alcohol. Like none, ever, never, ever …ever. Okay that’s a lie. I have drank alcohol in the past but at present I do not. I rarely drink, maybe once every 5 or 6 years I’ll have a glass of wine. I know it seems like I do. Most of my posts probably make you think I am in the sauce constantly. But I get my happy on naturally, it’s how the Lunatic rolls. I mean if this is me sober can you imagine me loaded? Scary right! The reasons I don’t are pretty varied. Here’s a list, you know I love me some lists. *giggles*

Why the Lunatic avoids the sauce:

1- I am naturally a nut so help is not needed.
2- I actually do not like the taste of it.
3- I am a control freak in a big bad way so doing anything that makes me lose control is not happening.
4- I have Irritable Bowel Syndrome, very wicked case of it, alcohol is my biggest trigger.
5- I have a friend who was in an accident involving drunk driving who has permanent brain damage.
6- I have a friend whose husband was killed by a drunk driver.
7- Alcoholism runs in our family, so I’ve seen the dark side of it. Changes your perspective on it.
8- I think it’s wicked expensive and would rather spend our limited excess funds on the horse.

So there you have it. This is not to say I haven’t gotten loaded a few times in my life. I have on occasion had some drinks. One time in particular my sister in law decided we were getting drunk at a wedding. So we did, had some fun. Then the next day the family and wedding party went to a baseball game. So we took the bus from Windsor over to Detroit. Halfway there I got a tummy ache. By the time we got to the stadium I was a mess and to put it kindly let’s just say I sat by myself close to the loo and knew the bathroom attendant by name by the time the game was done. Yup, I’m a prize people. This girl knows how to party, then embarrass the entire family in grand fashion!

Okay so the story I am suppose to be telling you is this. Since we do not drink here at the Bee household I never buy alcohol. Which means making vanilla meant I needed to hit the liquor store. I have to admit I just wanted to go in as I heard the magazine the LCBO puts out had awesome fall recipes. So I had an agenda before I walked in. So I had mini-me tag along, those who don’t know mini-me is my 18 year old daughter. We hopped in the SUV and headed uptown. Pulled in the parking lot and off we trekked over to the local LCBO. I swear to god people hone in on non drinkers right away. The cashier was staring at us the moment we walked in the door. I’m certain it had nothing at all to do with the fact that I had only been in a liquor store once in my life and was like a deer in the headlights trying to figure out where the vodka was. Within minutes mini-me and myself were in hysterics as per usual. God forbid we walk in a store and not make complete spectacles of ourselves. Now mini-me would tell you it’s just me making a spectacle but she’s an accomplice so she’s just as guilty in my book. We wandered around like complete tools for a minute. I had no clue where the vodka was, mini-me pointed to it and frankly said it’s right there. I then gave mini-me the hairy eyeball wondering how she knew where it was. When I interrogatedcuz they were “so cute”. And off we went to the car, about $12 later and with a free score of a killer cooking magazine. I still have no idea why the cashier had it in for us. I can only imagine saying something like “holy shnikeys this place is huge” is not considered playing it cool. I am also quite certain the very loud “Squee, these little bitty bottles are so cute it just makes me want to start drinking” had anything to do with any of the raised eyebrows by cashiers and customers alike. We kept it classy as always. I mean seriously where’s the LCBO’s sense of humour anyway. Lighten up hairy eyeball cashier, have a drink, life is suppose to be fun. Even an old fuddyduddy like me knows that. 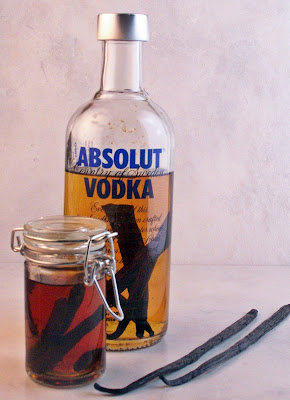 Yup, so there you have it. More wisdom from the Lunatic. Aren’t you glad you read me? It’s like the most educational blog out there right. Or whatever. 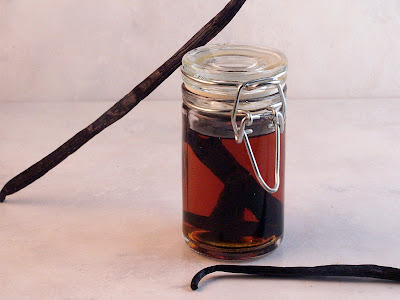 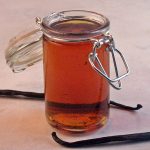 How to make your own homemade vanilla extract. 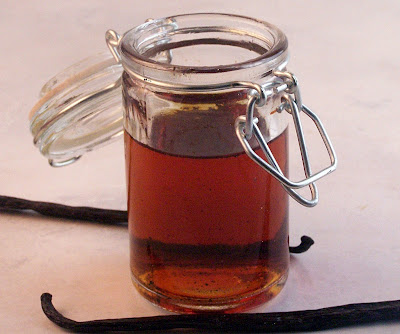 I have to say this was pretty cool. My only complaint would be the colour. I would think using a darker alcohol would be nice. Since I have no idea what would work I’ll take any advice you can offer. Perhaps rum? No clue!