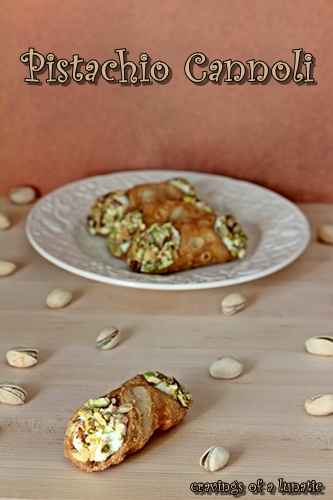 You all know how much I love pistachios. I mean it's a love like no other. It surpasses my love of turtles even, and you all know how crazy I am about turtles. Pistachios are my go to snack. My favourite thing to munch on while watching a t.v. show or a movie. I love using them in baking. Any excuse to crack open some pistachios is a good day in my book.

When Aurora Importing sent me some cannoli shells I knew exactly what I was going in them. I knew it just had to be something pistachio. I knew I could just dunk the ends of the cannoli's in chopped pistachios but that just wasn't going to float my pistachio boat enough. I wanted more. So I decided to add flavour to the filling. I made two batches. One traditional batch using a wonderful recipe by Grace's Sweet Life. She makes a wicked good cannoli filling using ricotta which I loved. Mini-me however is not a ricotta fan so I decided to make a batch using whipped cream instead. Then I made the leap to adding a hint of pistachio flavour to the whipped cream. Then I dunked the ends in chopped pistachio. In my world if a little pistachio is good then a lot of pistachio is even better. It's a good motto to have. More pistachio makes a happier Lunatic. 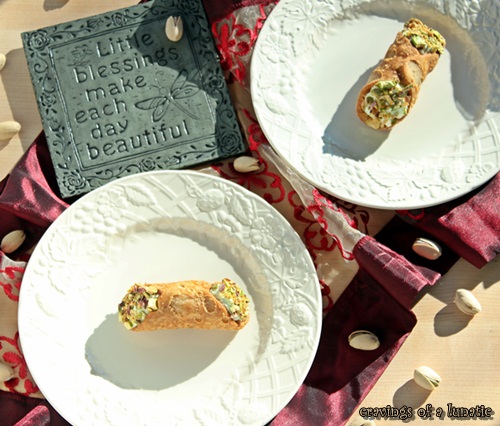 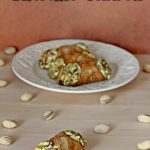 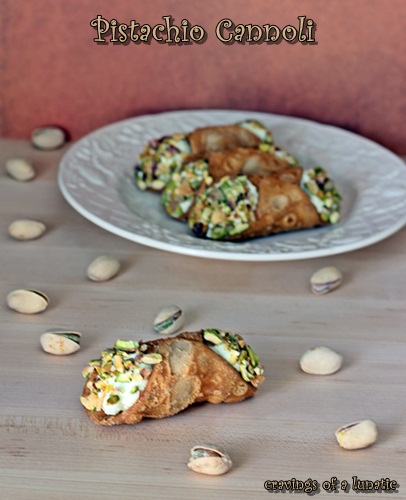 These are the bomb. I know we all use that phrase way too much. In this case however it's wickedly true. They are so good. I could eat them all up by myself. Not that I did or anything. I mean who would do that. *wipes pistachio cream off her face*

Now I know it's not a traditional cannoli filling. If you want one of those I would head over to Grace's Sweet Life and use her recipe like I did. It's fantastic. She has a cookbook too, which I don't have but it's on my list of must have's for 2013.

I've worked with Aurora Importing before and completely love their products. So when we talked about working together again I was thrilled. They know I am a pistachio fan so they also sent me a Fiasconaro Dolce Verde Pistachio Italian Christmas Cake. It's similar to panettone but loaded with pistachios and comes with a pistachio cream you spread on top. It's divine, a pistachio lovers dream come true. The lovely folks at Aurora Importing offered to give away 1 of these bad boys to one of my readers. So if you like pistachios, and who amongst us does not, we'd love for you to enter. 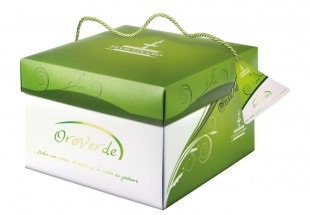 Giveaway Closed, Winner has been drawn. Thanks to everyone who entered!

For additional entries please do any of the following:

Giveaway is open to Canadian Residents only. Sorry US and International friends. Giveaway will close on January 3, 2013 at midnight. Winner will be notified by email and has 72 hours to respond or a new winner will be drawn. 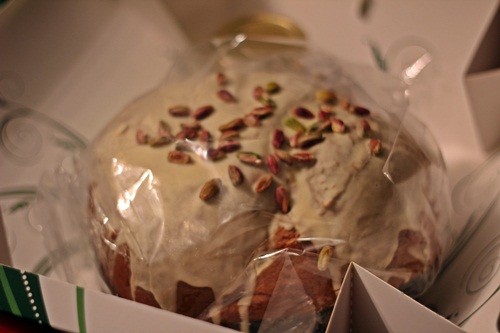 Almost ready to be sliced into!

Aurora Importing is such a great company. I encourage you to visit their blog as well. It has lots of cool recipes and information. You can also check out their Aurora Youtube Channel. They also have a Recipedeo Youtube channel that's wicked cool.

I would also like to extend an invite for you all to stop back on Saturday when I will be sharing my olive oil tasting with you and giving away a Frantoi Cutrera Specialty Tasting Box. I cannot even begin to tell you how awesome these oils are. I look forward to sharing my thoughts on it with you on Saturday. With lots of photos.