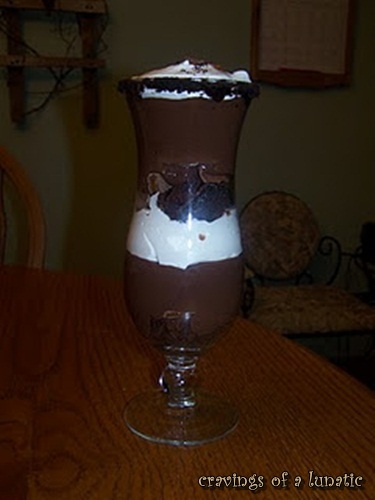 Okay so going to do this is individual posts so it's not so rambling. This recipe is an old fave I have not made in probably over 15 years. I never wrote it down so hopefully I made it right. If not, it's not like you'll ever know right! *giggles* 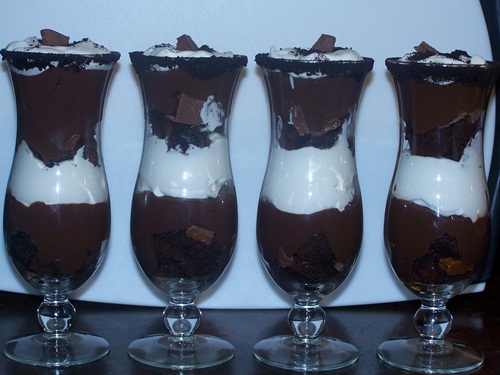 Sex on the WTF:


1 pan of Brownies (these can be homemade or store bought.you could even use those bite size ones)
2 cups of Whipping cream (this can be homemade or store bought.i used dream whip and used actual whipping cream instead of milk.so I used 2 packs of dream whip to make this)
2 cups of chocolate pudding (you can make your own or buy it already made.i made the jello version but used chocolate milk instead of white for more BAM chocolatey goodness)
3-4 skor bars broken into bits (i usually start with 4 and end up with 3 after munching while i prepare)

1. Divide brownies into 2 sections, setting one half aside for later. Break into small pieces into either a large trifle bowl or a bunch of small glasses or bowls. (i used parfait type glasses)

2. Divide skor into 2 piles and set aside one for later. Also set aside a some for garnish if you'd like to be creative.Now drop these pieces on top of brownie in bowls.

3. Divide pudding into 2 and set aside half for later. Drop about 2ish tablespoons into parfaits or all into a large bowl depending on what you're using.

4. Divide whipped cream into 2 setting aside half for later. Drop about 2ish tablespoons into parfaits or all into a large bowl depending on what you're using.

Follow steps 1-4 again. You can garnish the top with broken skor bars of chocolate oreo crumbs. I dipped my parfait glasses in water beforehand then rolled the tops in chocolate crumbs. Looks just lovely. Takes a few seconds but the presentation is lovely.

Pop in the fridge for at least 2 or 3 hours so things soften. I leave mine overnight as I like the brownie to soften alot and the everything to meld together.

Now honestly this can be done with no cooking and if you just flop it all in one giant bowl it's super easy and quick. If you buy prepared everything it would take probably 5 minutes to toss together. Enjoy. Smoochies!