Home » Cravings of a Lunatic » Grilled Pineapple with Cinnamon, Nutmeg and Vanilla 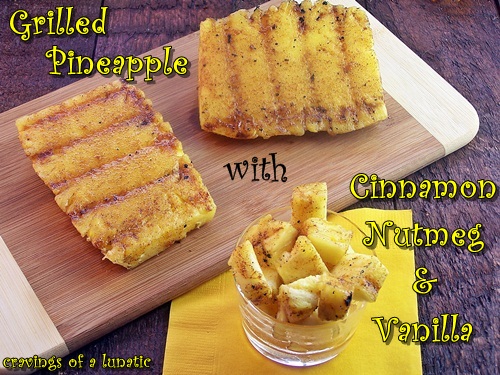 I am so happy to be here with a new edition of Give a Girl a Grill. I love to grill. I mean love, love, love it. I will not let hubs anywhere near my grill. Ya, you heard me. MY GRILL! It is mine. All mine! He can go water the flowers or something. The grill belongs to me.

Most days I can be found grilling in the summer time. It saves our house from getting swelteringly (what? it’s a word!) hot. Our a/c blows, but not in a good way. When we bought my folks place after my dad passed away we remembered him cheaping out on the a/c unit he put in. We put one in at the same time in our old house. When you walked into our place it was like stepping into Alaska. When you walked into dad’s place it was like stepping into a volcano. All to save a mere $300. I swear when we have some extra moolah lying around I’d love to upgrade it. But seriously, who has thousands of dollars just lying around. Hey Oprah, can you loan me some moolah? I’m hot girl. Do a friend a solid.

Okay so this is a quick treat you can whip up for the kiddies. Or the adulties. Whoever you want to whip up an 8 minute snack for. Okay, that’s a lie. It took 2 minutes to cut and glaze it. So it’s more like a 10 minute snack. Okay, so maybe 12 tops! So have at it folks. You will want to hug me, and kiss me and squeeze me all over. But I won’t let you. Cuz Lunie don’t hug remember! Now get your mitts off me and go grill dangit! 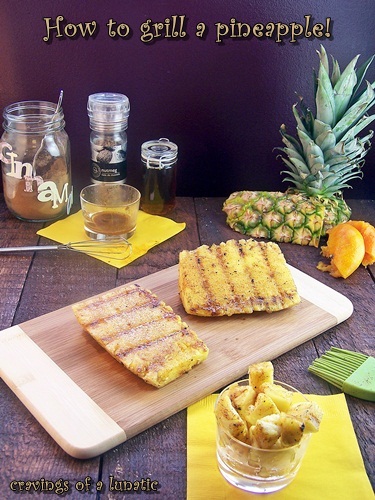 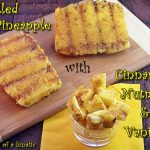 Another way to prevent sticking is to spray non stick spray on the grill BEFORE starting it. I usually turn it off right before I put stuff on it, spray it again and then reignite it. Otherwise the spray burns off while it preheats. Just remember NEVER to use non stick spray while it’s on. Very dangerous!

Also I like to turn one side off when doing something like this. That way if one piece cooks faster than the others, or you get any flares up from the juice you can always move the fruit over to the side that is off. Just a little tip for you.

Nutrition Facts
Grilled Pineapple with Cinnamon, Nutmeg and Vanilla
Amount Per Serving (1 g)
Calories 0
* Percent Daily Values are based on a 2000 calorie diet. 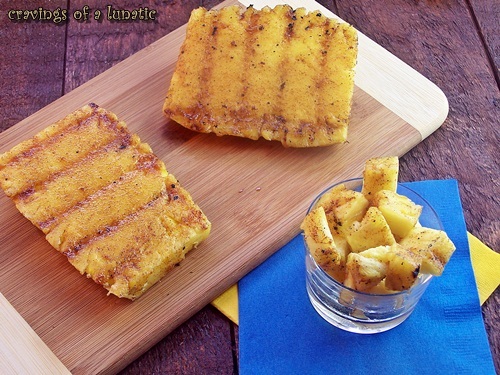 See, easy peasy and pineapple squeezy! Anyone can do this. It’s a great light snack for the kids while you’re chilling by the pool. It’s also good for other things because you can use this in other dishes. Which I did. Which I will share with you later this week. Which I am now laughing hysterically about as you sit there wondering what I did with it. Which is where I will leave you hanging.