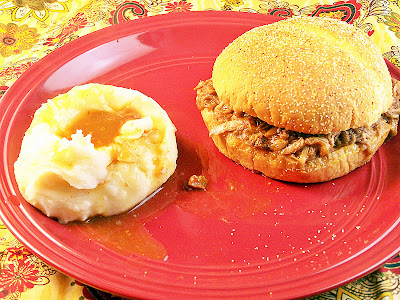 Hi folks. I know, I know, a day late and a dollar short right. Seriously they need to amend that to be in line with inflation. Should be a day late and a thousand dollars short if you ask me.

So here I am a day late with my "SLOW COOKER SUNDAYS" kickoff. I seriously need to pre-make my meals instead of making them on the theme day. Always puts me behind. I'm here now and ready to rock. You bring the rolls.

This recipe was a first for me. I've never done pulled pork before. I searched around and found some recipes but nothing spoke to me. I went to the butcher to buy my roast and the lovely lady that helped me was telling me how she makes hers. Needless to say we ended up gabbing about various ways people make it. What works and what doesn't. How to cut the zing or do you want it zingalicious. Smokalicious or smoke free. The possibilities are endless. But one thing was clear to me. This is one of the easiest things in the world to make. I mean it is just so simple. So when something is simple you just don't mess with it. It's good to leave well enough alone. There are too many complicated recipes out there. This is not one of them. I was shocked how easy peasy, bbq squeezy it really is. Yah for simplicity.

Well now hold the phone people. You didn't think I was just gonna make it without a twist did you? I kept it simple. I kept it easy. I kept it BBQ squeezy. But I'll be darned if I'm gonna pour a Coke over a perfectly good roast. Blasphemy! I hate Coke personally. Nothing against those who like it. Nothing against the makers of Coke. But let's just call a spade a spade here folks. Pepsi is far better. So you know what the Lunatic did right? You have guessed right? *or just read the blog post title right* Yup, I said to H- E- double hockey sticks with the Coke and poured a bottle of Pepsi instead. Yeah me! A genius! Truly, seriously, remarkably brilliant. I mean just send the Pulitzer now. Call Mensa immediately. I just made history folks. Well, actually I made Pepsi Pulled Pork but you know, potato, potat"o".

Waits for the applause....

Waits for the million dollar cheque....


Set you roast inside your slow cooker.


Cover and turn on the low setting. Will take 8 to 10 hours depending on size of your roast. (mine was small so about 8 hours)


When it looks done you want to pull it apart. I did it right in the slow cooker. You're not cutting so it's fine to do this way and less cleanup later which is nice. So take a two forks and start pulling the meat apart. Really easy to do, do not be intimidated by this step. It pretty much just falls apart anyway.


Now add your barbecue sauce. I covered it back up and cooked it for another 20 or so minutes to let the taste of the sauce soak into the meat.


Now you can start piling the meat on burger buns.


Serve with a smile and about a thousand napkins. So good but SO messy.


SOME MORE PICS FOR YOUR VIEWING PLEASURE. 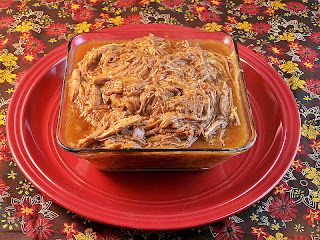 "I'D SELL MY SOUL FOR YOU BABE" 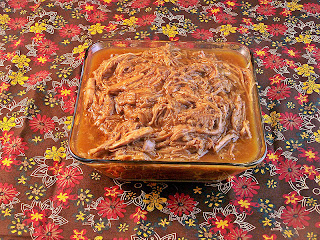 "FOR MONEY TO BURN WITH YOU" 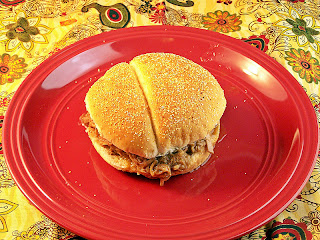 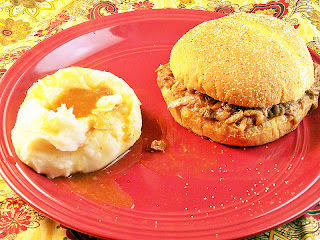 "JUSTA, JUST, JUSTA, JUSTA TO HAVE YOU HERE BY ME" 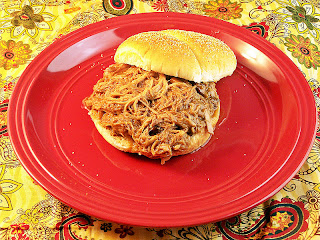 
See, sometimes a little rebellion is a good thing. I have issues people, whatdaya want from me!!!

The only thing I would change in this is finding a way to make it less liquidy. Either use less pepsi, or maybe add a thickener to it about 30 minutes before it is done. Although I found good use for the liquid. I poured it like gravy on the mashed potatoes. Genius strikes again. I cannot be stopped people. They just keep coming to me. Next it'll be, it'll be....men in white coats I'm sure.

So I hope you enjoyed this first installment of "SLOW COOKER SATURDAYS". They are now a regular feature here at the Lunatic's. I may toss in some extra slow cooker recipes as well. I use mine tons so it frees up time for the barn, and a life not chained to the stove.

See you all soon folks. I shall return with an ice cream post that will rock your world. Okay so maybe that's stretching it a bit. It'll rock your socks off.


ps. I don't understand why my spellcheck flags so many words. It's not like I'm just making words up or anything. Seriously spellcheck, take a pill. Pfft!