Today we are hurtling towards Alberta in our SUV. So I’ve arranged guest posts for you while I’m away. I knew exactly who I wanted to kick off the festivities so I sent out an email to the one and only Movita Beaucoup. I heard back from her immediately which I took as a really good sign. I think she mumbled something like “cripes you mofo-ing pain in my ballet slippers, like I don’t have enough frickin’ crap to worry about right now” or something like that. Okay that’s a total lie.

But there was something about her being in the shower with fish and fat. I have no idea, I wasn’t really paying attention cuz I was lol-ing at the fact she knows me well enough to call me dude. That’s the kind of sh*t us Canucks do that crack other Canucks up. We also like to rub in the fact that the word “lol” really bugs the living crap out of some people so we try to say “lol” as many time as we can while “lol”-ing at everything that’s “lol” worthy cuz that’s just the kind of crap that make us all “lol”. Am I right? Give me a hell yah. Lol!

Movita is my absolute idol. She is a straight forward, blunt, tell it like it is kind of gal. Call me crazy but I dig that in a chick. She’s like Cher but more graceful and swears more. Plus she likes unicorns so I mean basically we’re like soul mates or something.

If you’ve never stopped by Movita’s blog, well basically you’re a tool, or living under a rock or something. The lady has competitions on her blog like the Pumpkin Carve-off, Ginger and Bake my Cake. They get wicked competitive and people get mad and throw temper tantrums when they don’t win. It’s the stuff of legends I tell ya.

Movita kicks a** when it comes to baking. So much so that she’s going to real live baking school soon. Can I just say how jealous I am. I am also really proud of her. I mean trading in your pointe shoes for safety clogs is a really big deal. I could not be beaming with more soul mate pride right now. I’ve got her unicorn packed and ready to send as her graduation gift. I’ll just hang onto it till she’s all done. Sort of like her unicorn keeper. You know like Jon Cusack in Say Anything. That’s me, but with longer hair, cooler friends and a unicorn.

If you are a regular reader you know Movita has been here before. I had the pleasure of interviewing her for my Burning Down The Kitchen series. If you haven’t read it you should. Movita was a riot as usual and you even get to see her in a bikini. I know right. I’m like the Barbara Walters of blogger interviewers. Who else could get Movita in a two piece. I made her Classic Cupcakes for that post and loved them so much. I mean any time you get to make your family’s teeth blue and not tell them about it is a good day in my book.

I’ve bookmarked a gazillion of her recipes. Everything from her Taco Salad, to her Weekend Salmon, to her Lasagna, to her Caramilk Brownies, to her Olive Oil and Fleur de Sel Crispie Treats. Everything she makes has me slamming my head up against the screen to get a better look. Now I’ve got a permanent goose-egg on my noggin and it’s all Movita’s fault.

So stick around and give a rowdy lunatic welcome to Movita as she returns to the asylum.

Hey there, Lunatic fans! My name is Rachael, but a lot of people call me movita beaucoup. I’m super excited to be here. Mostly because I want to tell you all about how Kim Bee ruined my summer.

A few months ago, Kim was kind enough to feature me in her Burning Down the Kitchen series. We had an email exchange in which she mentioned that she planned to come visit me here in Nova Scotia. She was all: I’m coming to visit you in the summer. I’m not kidding. So, I got really excited. And then, in my BDTK interview, she reiterated her plans, and asked what I would make for her when she came for a visit. I told her I’d make her chowder and feed her lobster. Because that’s what we do in these here parts. We shove fish in people’s faces.

Naturally, I cancelled all of my plans for the summer. I cleaned the house. I hid stuff. I bought new underwear. And I fine tuned my chowder recipe. I wanted to make it just right for Kim – laden with scallops and lobster, and rich with butter and cream. And then I waited. Because I assumed Kim meant she was coming to visit this summer. That one day the doorbell would chime, and I would open the door to find Kim sitting atop a horse with a saddle bag full of sugary cereal. For many days, I refused to leave the house. You know, just in case. And then, after weeks of waiting, there it was. An email from Kim. I knew it, I thought. I knew she wouldn’t let me down. I figured she was emailing me her travel itinerary.

But Kim was emailing to ask if I’d do a guest post. Because… what? She’s driving her kid out west? And that’s when I knew. I knew Kim wasn’t coming. Because she would be driving across the country with her crappy kid. She was getting about as far away from Nova Scotia as she possibly could. And it was time to accept that Kim wouldn’t be sitting down to a bowl of chowder with me any time soon.

Here in the Maritimes, we’re all about seafood chowder. Every family has their own version. Many recipes remain unaltered for decades. Some are different each and every time they are made. Some chowders are thick, and some are thin. The ingredients may vary, but the idea is always the same: good fishy stuff for your belly. Stuff that will warm your weary bones. You can eat it in bowls or mugs, standing over the stove in the kitchen, or at a cook-out by the sea.

This chowder is a combination of two family recipes – my family’s and 2.0’s. That’s what I call my dude – 2.0. Because he’s next level. Everything got better after meeting him.  And when our families came together? Well, more awesomeness, of course. It’s very much like my standby, Beaucoup Seafood Chowder, but better – because of the addition of 2.0 and his family. Wait. They aren’t in the chowder, I just worked in some of their chowder philosophy. Thus I present to you: Seafood Chowder 2.0.

This is not a thick chowder, it has a more brothy consistency. Herbs and spices float on top like seals in the Bay of Fundy. The scallops and lobster aren’t optional – leave ‘em out and you’ll be sorry. They bring a sweetness to this Maritime kitchen party. Same goes for the butter and cream. Live a little. And like any traditional chowder, simple ingredients come together to make something brilliant. Kinda like when I met Kim Bee. Blogging is better when she’s around. She’s got your back. She’ll make you feel like a rock star. She’ll be the best friend you’ve never met.

So Kim? I forgive you. I forgive you for ruining my summer. And when you’re ready to head out East? I will make you chowder and teach you how to dance in the kitchen. I’ll show you how to crack into a lobster and fill you will cheap booze. I’ll hold your hand when you think the ocean at Peggy’s Cove is going to snatch you up. And I’ll let you sleep in the car as we drive from coast to coast to coast… 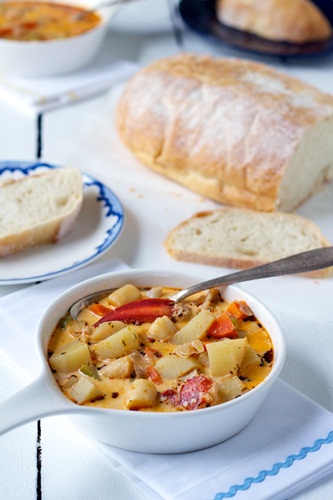 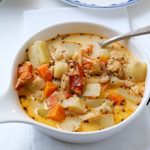 Movita says "I find chowder is best on the second day, so when entertaining, make it the day before – it will save you time and stress on the day as well.

After refrigeration, I put the pot on low and allow 30 minutes it to heat through. Do not allow the chowder to boil – low heat is key.

You will notice that the spices seem to sit on top of the chowder, like an oil slick. Don’t worry – when you serve, give a little stir and then scoop – just the right amount of spice will come up with the ladle." 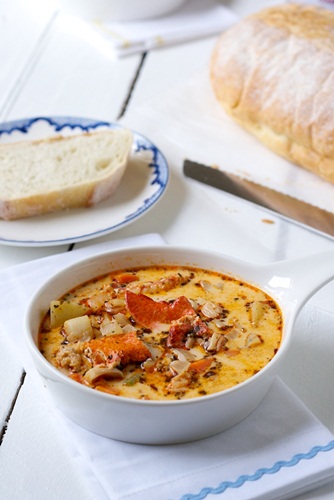 Cripes, I think I might have to give her two unicorns to undo the pain I’ve caused her this summer. Maybe one with ribbons and curls wearing a tutu, and the other one in chef’s hat wearing a funky apron with lobsters all over it. I almost feel bad. *skips off to braid Movita’s unicorn’s mane*

A huge thank you to Rachael for swooping in to save the day. You are my hero and I’ll Thelma and Louise it with you any day. Well, except today. Cuz today I’m hurtling in the opposite direction with my crappy kids lol-ing our hearts out. But next summer, well, that’s all you baby. You can cook for me and teach me to dance. I’d suggest some steel toed boots for that project. Lunie ain’t graceful. Not even a little.

Make sure you stop by Rachael’s blog, Movita Beaucoup and stalk the living crap outta her. She’s on Twitter, Facebook and Pinterest so stalk her all those places too. You will love her so much you’ll probably stop reading my blog. Hm, okay so maybe this was a bad plan…

I’d also like to thank Movita for bringing back some wonderful memories of my dad. He grew up out east and was a seafood junkie. So chowder was something he ate a ton of. We even had live lobsters swimming in our bathtub from time to time. And a little known fact about Lunie, when I was a wee little baby my folks gave me a stuffed lobster to sleep with. There are pictures of me hanging out with my lobster. I’m not sure what was wrong with my folks that they thought giving a wee little baby a toy with scary claws was a good idea. I’m convinced it’s why I have insomnia to this day. I mean seriously, ever heard of a cuddly teddy bear. Cripes!