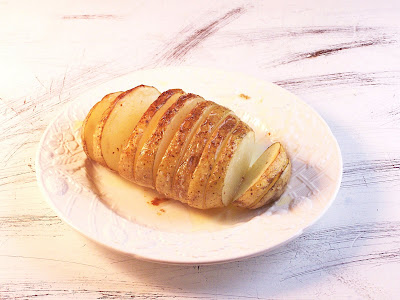 Hi folks. Okay this is a 2 parter. Yup, I'm getting all fancy and stuff on you. Next thing you know I'll be doing podcasts. Er, maybe not. That would involve being on camera and people seeing the size of my butt. So hm, maybe not so much. Not a big fan of having someone film my butt. Or anything else for that matter.

Alrighty roo, got totally off topic in all of .5 seconds. Might have been a personal record. I mean at least I'm improving at something. Gotta set your goals low so you're always happy. Wait...what....that can't be right. I think I meant to say do everything mediocre so people don't expect much from you. Wait...what...that can't be right either. I think I meant to say aim low so you're never disappointed. Yah, that's the ...well that ain't right either. Okay new rule, Lunie does not give advice. At least not until she's fully fueled up on pepsi for the day. *yawn* Nope not there yet.

Okay so here I shall be showing a hasselback cooked with butter. I also made a hasselback made with olive oil. The thought behind this experiment was to see if there was a huge taste difference. I did the high fat one oozing with butter. I did the low fat one with very little olive oil. I shall tell you which I liked better at the end. I have been neglecting my other blog since weevilgeddon hit.

Alrighty now, on with the experiment. A little safety advice first.

ALWAYS WEAR SAFETY GOGGLES WHEN DOING EXPERIMENTS. I know it's not necessary but I would like you to do it and then send me pictures of you doing it so I can laugh at you. I mean *with* you!

MAKE SURE YOU KEEP A SAFE DISTANCE FROM OPEN FLAME.  I say this from personal experience as I caught my oven mitt on fire while gabbing with mini me last week. I have to say I must be the calmest person during a crisis. I just kept talking and cooking and acted like nothing happened. Mini-me was all worried and I was cool as a cucumber. Being Martha during a crisis is one of my many talents. I can juggle too. Not while my oven mitt is on fire but you know, under normal circumstances.

DO NOT TOUCH HOT BUTTER. This advice comes straight from the emergency room. They tell me this constantly! The are discussing a mandatory tattoo on my forehead in a conference room right now. How does "beware of hot butter" sound, or should it be "butter burns, back away", or perhaps "butter hotter than it looks, handle with caution". Right smack in the middle or off to the side?

WHEN USING SHARP KNIVES YOU SHOULD ALWAYS USE CAUTION. I mean we all know this by now right. So I still can't figure out how it landed pointy side down on my big toe. It's a mystery. Hubs is considering wrapping them in hockey tape then wrapping that tape around my hand to be sure. But the worry is I'll just turn around to talk to someone and stab them in the arse or something. Maybe the hockey tape and a cork on the end of the knife. They make hockey tape in pink now right!?

LET YOUR FOOD COOL A BIT BEFORE EATING. This one is something we all know. Yet we get our food and act like toddlers and scarf it then hang our mouths open making stupid faces and trying to blow on food that's already in our mouths, all while trying to look cool and nonchalant about it all. There is nothing cool about someone dancing around in their seat, making weird faces and snorting food all over the place. Slow down people. It will help you avoid that strange no skin on the roof of your mouth feeling later. You've been warned. Doc says mine will be fine in about 2 days.

Okay so now that you're all safe and ready to rock n roll, here's the lowdown. Check out the drippy buttery version. 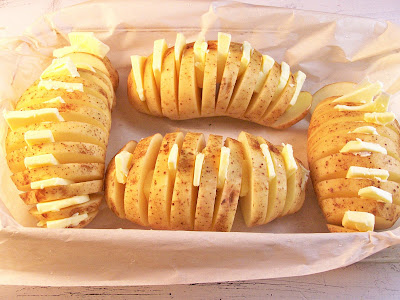 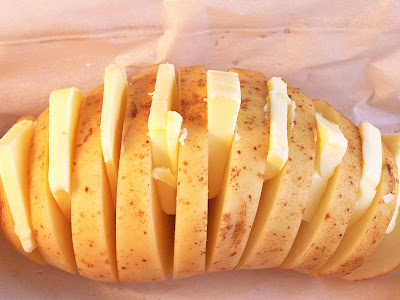 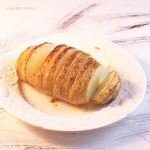 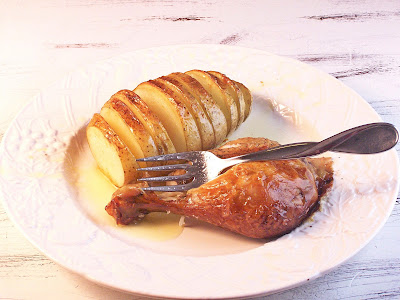 Looks super yummy right! We had ours with the chicken cooked in tea I did last month. Made for a wonderful meal.

Now for the verdict on Hasselbacks themselves:

Okay so I am going to be honest here cuz that's how I roll. I am not sure if I was expecting too much from these potatoes or what. I think I went into this with super high expectations. I was hoping it would taste like french fries or something. So I was mildly disappointed. Now putting aside my huge unrealistic expectations that somehow slicing them up all pretty would somehow transform the potato into a baked fry, they were really good. My advice would be not to use giant mutant potatoes from Costco though. Mine were excessively huge and they took too darn long to cook. Now I am most certainly making these again and doing more tweaking. I have some ideas to jazz them up and Lunify them.

Now for the verdict as to which one I liked better:

Will it be the dripping with butter version that is is so bad for you. Or the lighter version that won't give you angina. What will it be. Hm. Ah. Thinking. Pondering. It's a pickle. Did I mention I hate pickles? I like potatoes though. But which one? Hm. Ah. Thinking again. Okay. I got it. Are you ready for it? Are you sure? Okay, maybe you better sit down. No seriously. Sit down. NOW.

*does a good luck jig*

Okay folks I have an answer for you. I like the healthy version better. I know it's shocking right.

*runs off to get smelling salts for the mass hysteria*

Okay folks seriously, I like the olive oil version better. Not sure if it's due to the shallots or what. I just liked the taste better. It's funny too as I had oodles and bunches of pics of the lighter one but very few pics of the buttery one. So I suppose that speaks volumes as well.