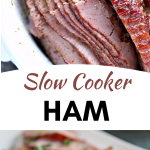 This Slow Cooker Ham with Honey Mustard Glaze is perfect for the holiday season. It's packed with flavour and the taste is out of this world. 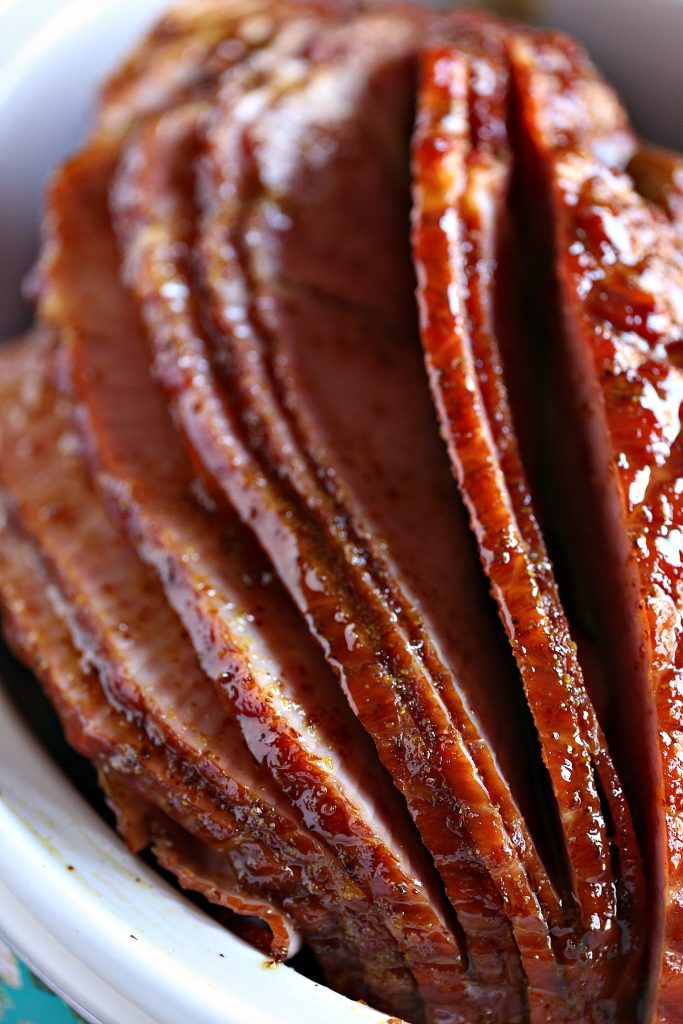 This spiral cut holiday ham is easy to prep and the perfect way to free up oven space on busy holidays.

My slow cooker did all the hard work today. If you love slow cooker recipes as much as we do, this is just the crockpot ham is for you!

This ham recipe is so simple to make and full of flavour. The glaze takes just a few minutes to make and then it is brushed over the ham before cooking. It's a thing of beauty.

Ham is always on our menu for Thanksgiving and Christmas. We tend to make it for Easter dinner as well. It's a great main course and feeds a crowd.

Making it in your slow cooker is the perfect way to free up your oven for other things, like lots of side dishes. We usually make two main course dishes for holidays.

Generally we make either ham or turkey for most holidays. Then I love making a nice beef option as well. Usually it's sirloin roast or pot roast. 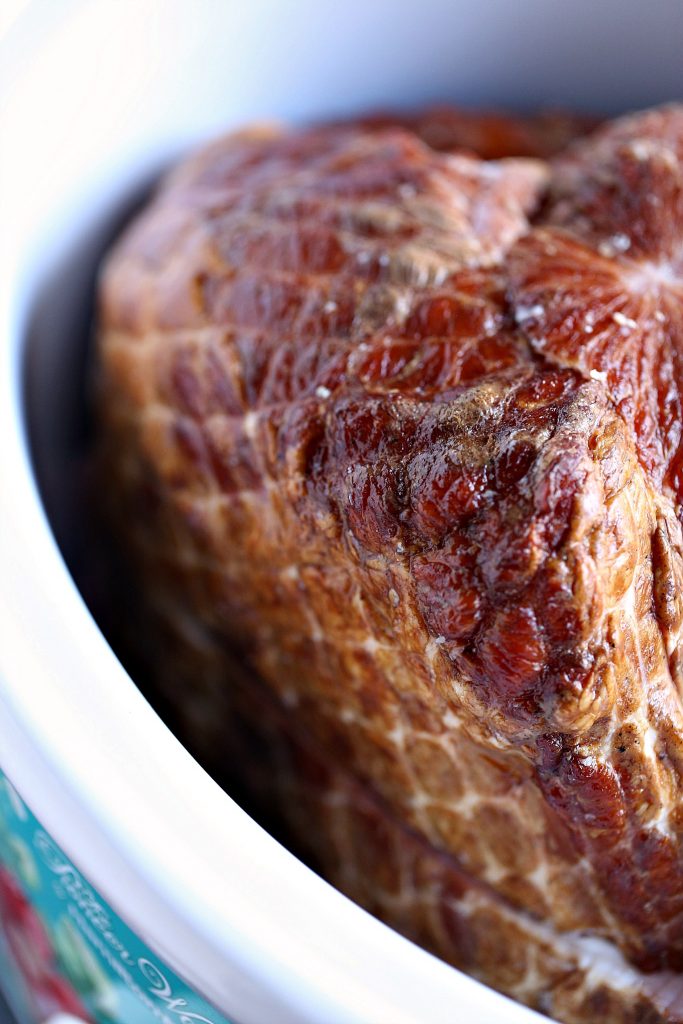 How to Cook This Slow Cooker Ham Recipe: 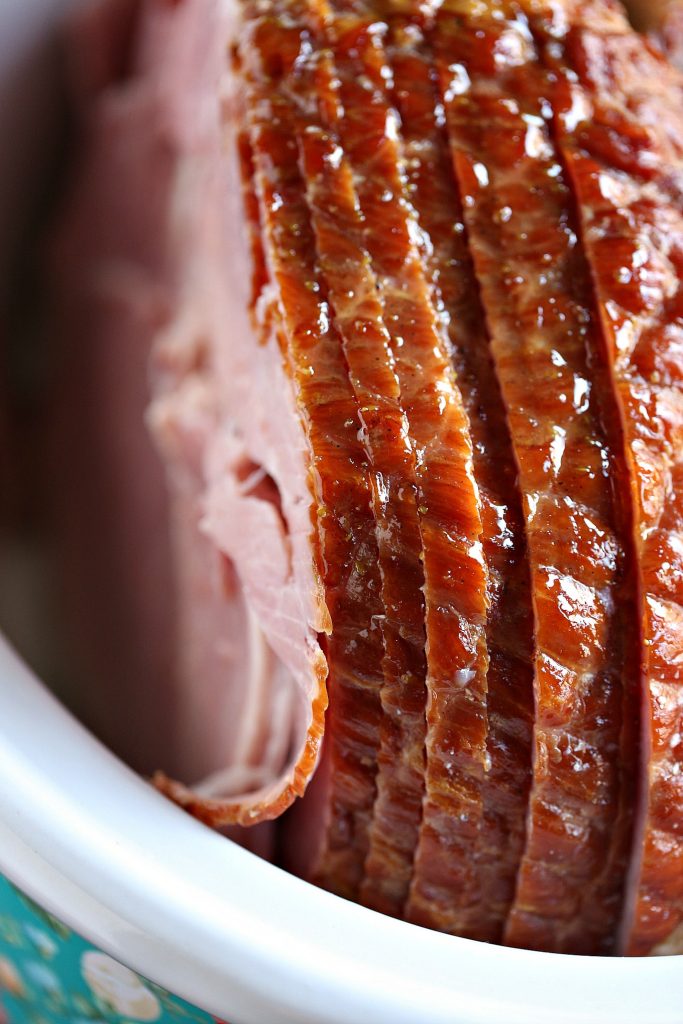 Which Side Should Face the Bottom of the Slow Cooker: 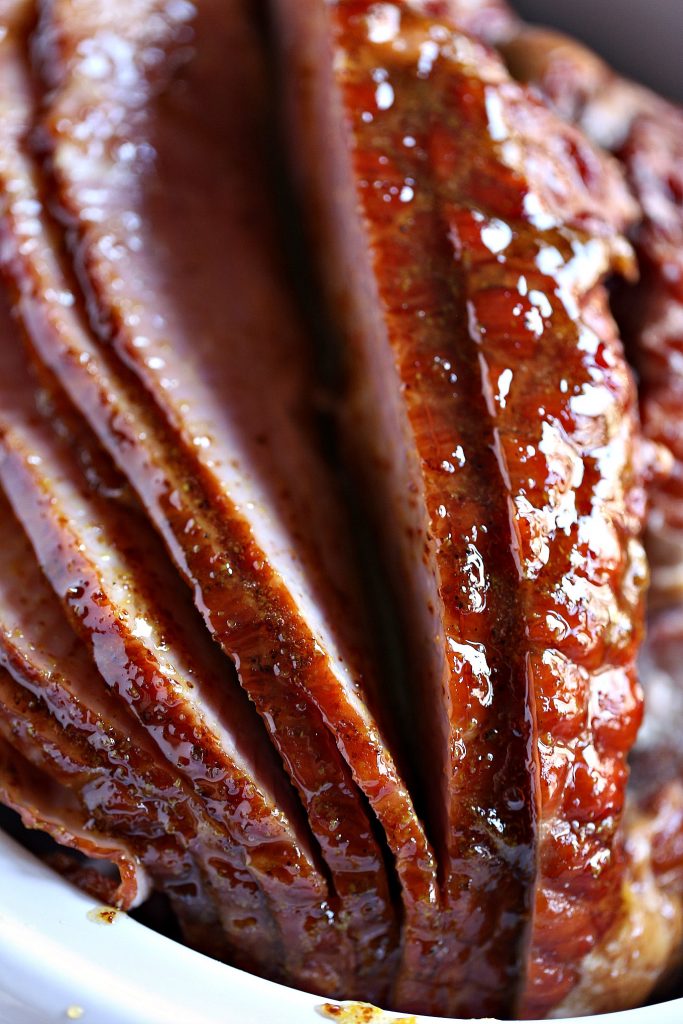 How Long to Cook a Slow Cooker Ham: 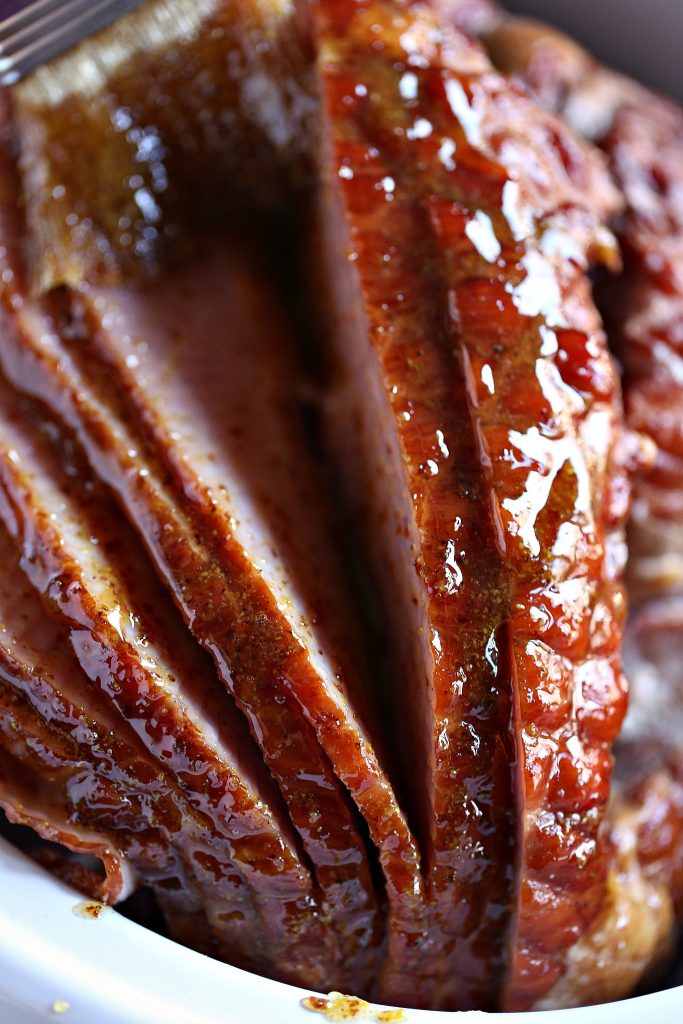 Should I Baste my Slow Cooker Ham: 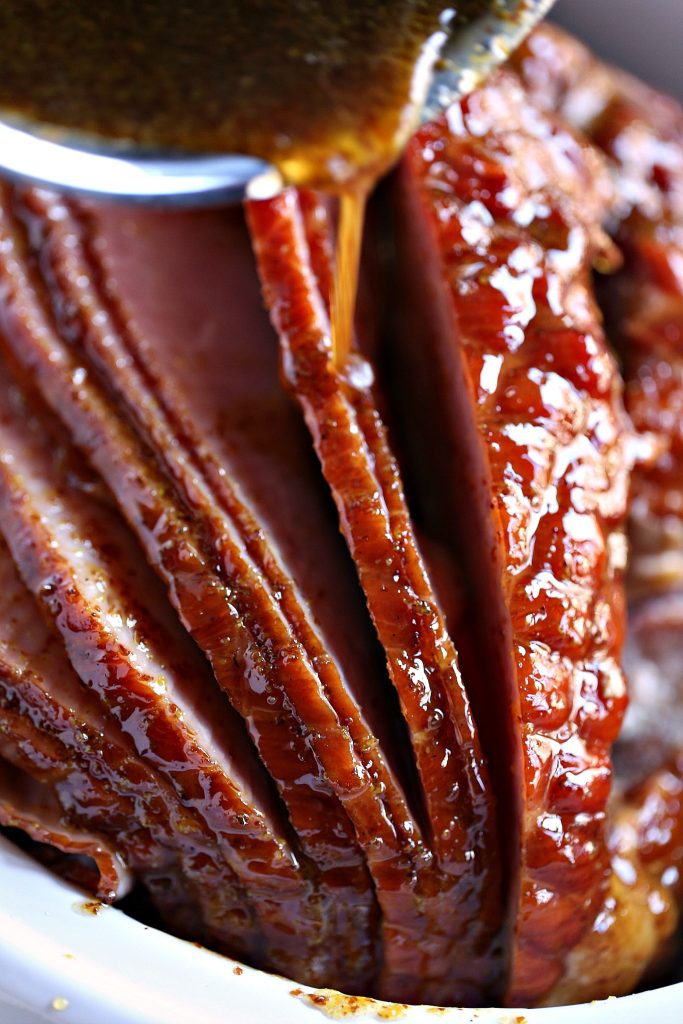 How Much Slow Cooker Ham Do You Need: 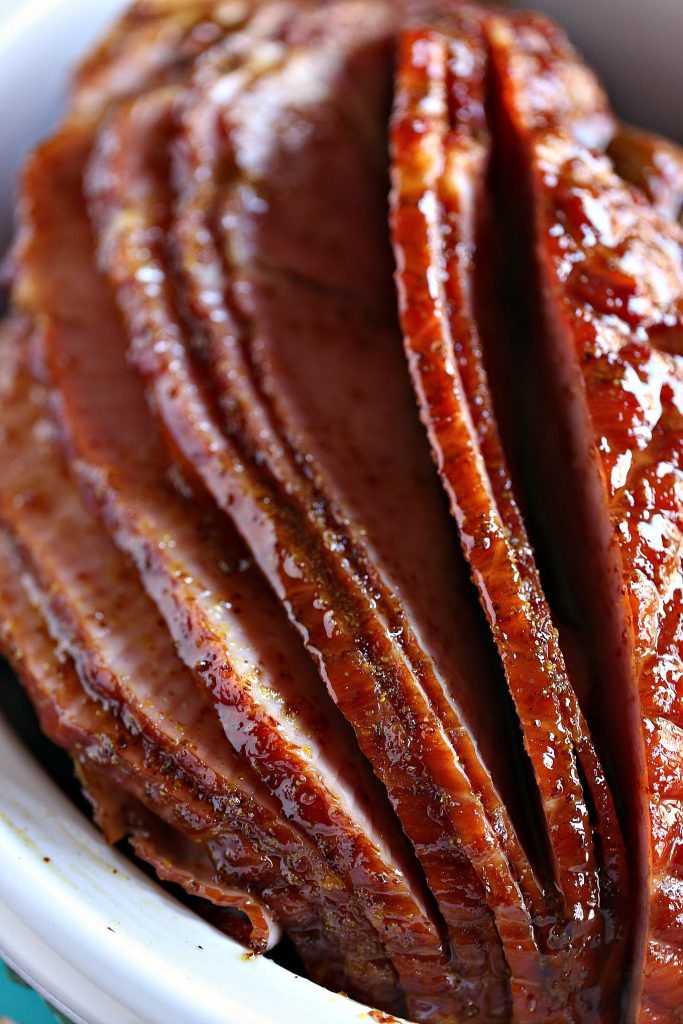 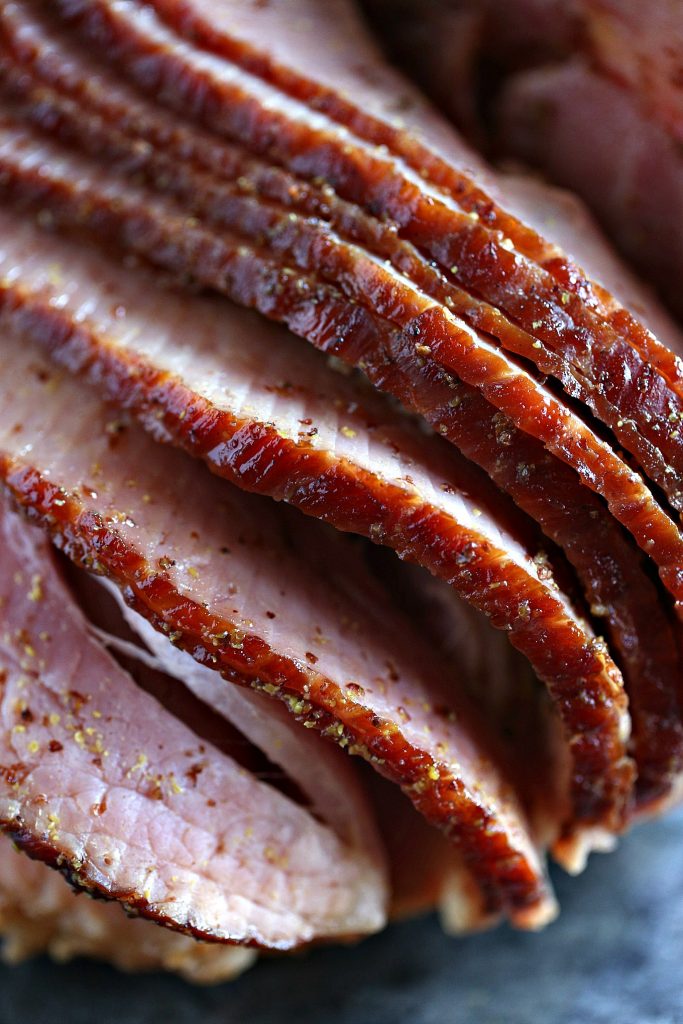 How to Reheat Leftover Ham:

Place ham in a shallow dish and add a little bit of broth or water to the bottom of the dish. Cover the ham with foil and place it in the oven.

Bake the ham for about 10 to 15 minutes, or until heated through.

Remove from oven, plate and serve.

This method works for cooking spiral ham that is still on bone, and also for ham slices.

Do not overcook or it will dry out.

Place the spiral ham or ham slices on a microwave safe platter or baking dish. Add a little bit of broth or water over the ham. Cover with paper towel and place in the microwave.

Cook time will range depending on how much you are cooking at one time. Start with one to two minutes for smaller portions, and increase time for bigger portions. Be sure to check 30 to 60 seconds after the first couple of minutes.

Do not overcook the ham or it will dry out. Add liquid helps retain moisture so don't skip that step!

This method is great for ham slices!

Grab a skillet and place it on the stovetop over medium heat. Add a little bit of chicken broth to the pan then add the ham slices. Cook for about 3 to 5 minutes, turning halfway through. Remove from heat, plate the ham and serve.

If you want the ham to taste more like a ham steak you can actually sear them on the stovetop. Place a skillet on stovetop over medium-high heat and add a pat of butter or oil to the pan. Allow that to heat for about 30 seconds then add the ham slices in a single layer and cook for about 1 minute on each side. Remove from the heat, plate the ham and serve. Work in batches if doing a large batch so you do not overcrowd the pan.

What to Serve with Slow Cooker Ham: 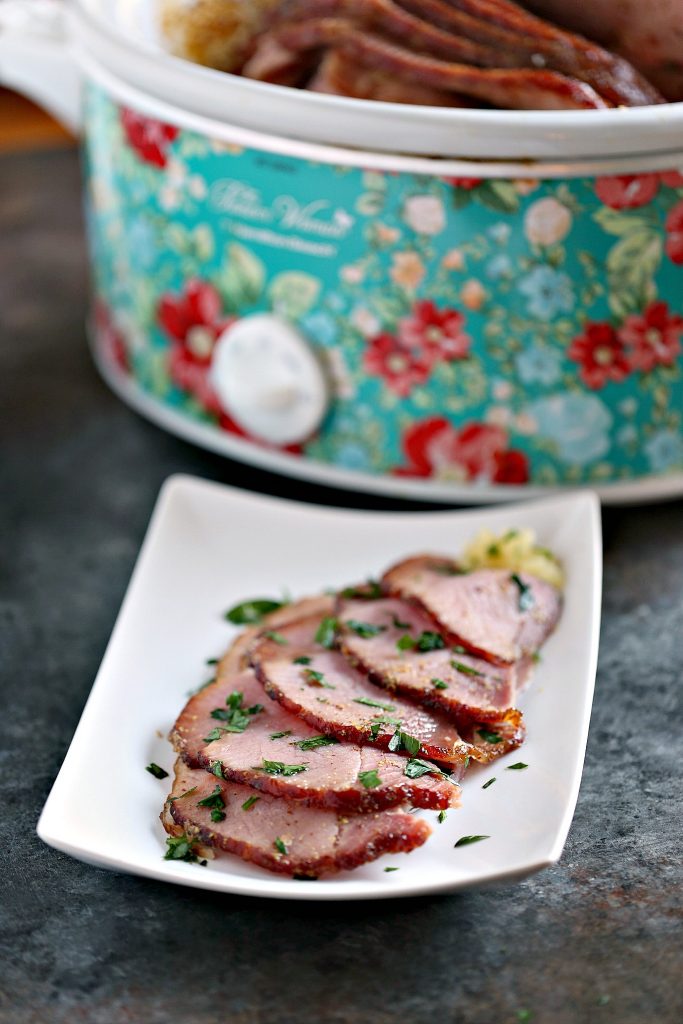 Places to stalk Cravings of a Lunatic 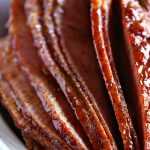 Nutritional information is based using a 10 lb ham and serving roughly ¾ lb per person.   Originally posted on December 22, 2019. 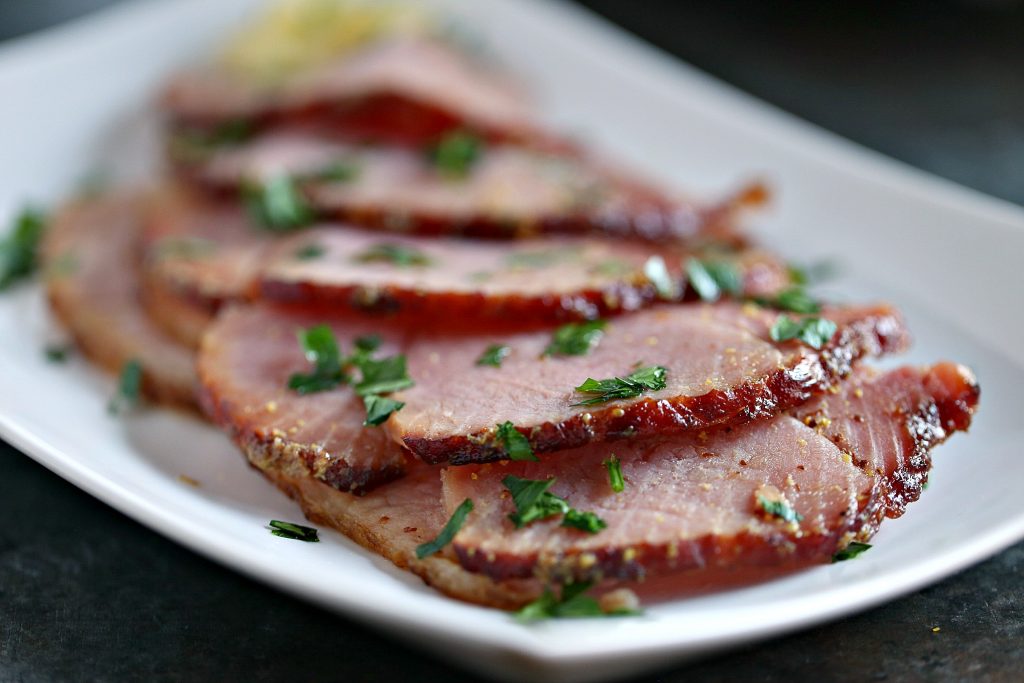 Thanks for visiting today

If you’re looking for more dinner recipes be sure to check out my recipe index. You can also find a lot more Christmas recipes as well.

Be sure to follow me on Pinterest while you’re here. I love pinning great recipes! Also, make sure you follow me on Instagram. It’s a great way to stay up to date with the blog.